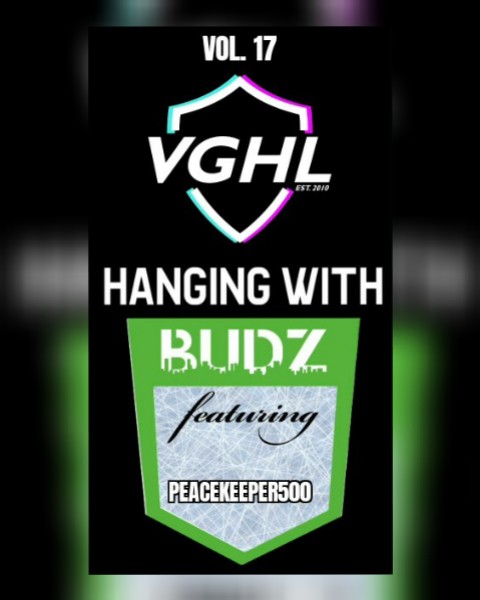 Helllllo VGHL! We are back and down in Florida with new Panthers owner Peacekeeper aka Marv!

Budz: Hey Peace aka Marv aka whatever else the hell your called! Welcome to Hanging with Budz! Finally after what a week? lol Glad to have you brother... Please before we dig into you and then your hockey career, go ahead and tell the VG community a bit about yourself!!!

Peace: Glad to be here Budz! I'm from New Jersey, I just turned 22 recently on March 13 and my name is Marvin. Everyone calls me Marv for short and just here to enjoy the entertainment of leagues! As most know, I'm a bit of a night owl also.

Budz: Right on my dude! So besides tending the twine on the ice during some of your free time what else does Marvin do? Any cool interesting hobbies? Interests? Any particular reason you are a night owl?

Peace: I find interest in listening to music, chillin with friends not much more with the covid going on! I really only play hockey as a hobby not much to do these days! I'm a night owl because I work nights so always around at night!
Budz: True that COVID has ruined a lot and has prevented us from doing lots! What do you do for work? If you dont mind me asking.

Peace: I work at a cardboard factory. Nothing big, just do what I gotta do!

Budz: Like we all do man! Nothing wrong about that at all! So being in the states. How did you come to like hockey and not one of the more traditional sports down in the good ole US of A??

Peace: Well growing up my parents were fans of football, hockey and baseball. There wasn't a game that wasn't on the tv so it's became a connection to me and I've always bought the hockey game every year, even before I knew EASHL was a thing. I bought 07-17 without even knowledge of EASHL being a thing so I bought the game all those years because I enjoyed and loved the sport as I have most games! So at the end of the day I have to thank my parents. I also believe I grew up in a hockey pro environment growing up where I did.

Budz: Thats really awesome man and interesting! As a Canadian its always nice to see people from around the world fall in love with the game we call our own! Thanks for sharing a bit about you personally! I enjoy getting to know the personal side of the community and not just hockey haha! So with that said onto the reason we are here! VGHL is entering Season 21 and looks to have another great season ahead. How long have you been apart of VG and entering this season what has you most excited?

Peace: Yes hockey is very dear to me indeed and I enjoyed sharing! I must say I'm very excited about the season ahead as you and most others know this is my first season as NHL owner and I was successful on my first time applying which I'm proud of! I've been in VG since Season 14 sometimes off and on but most of my seasons I didn't really stick on one team as I was moved around a lot. Lately, I've become much more connected and active in this league. Last season was my most active season since being apart of VG I believe! So just excited for the draft and bidding and getting it started!

Budz: Glad to hear man! And congrats on being promoted to NHL owner. Who is your captain and what kind of team does the VGNHL expect to see from the Panthers of Florida?

Peace: Thanks I appreciate it! You and my captain have made quite an impression on each other as any one who was present would know. His name is Leveskii and from Florida. You can expect a hopefully competitive team but seeing I have nothing but draft picks for the most part, gonna see how much I can build from the draft. Then take it on from there hoping for the best in bidding but I have no question that you should expect at least a middle pack team in my fair opinion!

Budz: I like the confidence not overly cocky just a quiet confidence which is always good to have! Yes, me and your captain have, as you know I am very outspoken and an acquired taste you could say lol! Do you look to build from the back end out thru the draft or take best player available? Whats your approach, your philosphy I guess you could say when you build a team?

Peace: Oh yes I know very well how outspoken you are! I believe that I would draft what I feel most fits our plans at 25. I'll probably take what I think is best with my seconds but it will depend heavily on what's remaining! As I did in the AHL, I'm probably going to bid most of our sources on a dependable line mate for Levi. Then depends on the bidding. I may grab a expensive D man or try to crap silently solid D men that get overlooked as I did last season in the AHL because there's D with skill, then there's D you can trust to be silently underrated!

Budz: I agree well said! Being in the East I look forward to the future matchups! Besides the obvious goal of playoffs and the Stanley Cup, what other team goals and personal goals are you carrying into this season?

Peace: Well I'd like to continue my success from last season into this season, so I'd just like to personally win more than I lose! For the team, I hope to get some solid bidding so I can try to have a solid season and build for the next season as well.


Budz: What position as an Owner, do you see as the most important? And will you spend what it takes to get that said position?

Peace: Well I would say center but seeing as I already covered that, the most important things to grab in bidding is at least one great D man and a goal scorer. I'd imagine it'd take a pretty penny probably around 7-9.

Budz: Ya for a good player who puts up points you definitely have to pay! I would imagine you plan to start for the Panthers?

Peace: With my schedule I will play when I can to be honest. With my hours, it doesn't line up best but I'll be able to play half the games.

Budz: Some have said Marv is a good goalie but he can get in his own way from being a true elite goaltender and a NHL starter. What would you say to the people making these comments about you and your game?

Peace: I personally have not ever heard that, if I'm being honest but it might have some truth to it sometimes. I get in my head I guess you could say like when I'm feeling good I play great but when I feel bad I just don't play up to my standards. I feel like I played up to my best in VG last season cause I was really enjoying my time and scarp made it easy to just chill and have a good time while being competitive. He will definitely be missed this season on my behalf! I hope nothing but the best for him going forward. He's got stuff going on that I will continue to support him through!

Budz: With roster construction underway in the shortest off season the VGHL has had and approaching the draft here soon. With the players that teams have returning, do you see the Buffalo Sabres once again the favourites for Ssason 21?

Peace: I mean it'd be hard not to see them as the favorites, just glad a decent amount of cap locked up in Dan so may not be as stacked as prior but they definitely will be really really good. Hopefully at a lower scale.

Budz: Truth to that taking on a 8 plus cap hit definitely reduces the chances a bit, but agreed they will still be really good! Besides them who else do you see your team fighting with for those playoff spots?

Peace: I think Montreal and Leafs should be pretty good seeing that they both had great teams last season and expect nothing less for sure!

Budz: Should be a fun interesting battle and season for sure. I'm looking forward to it and can't wait! As we wind down here and end this interview. Please give me your predictions on who will be the Top 3 players in the NHL entry draft of Season 21 and who wins the Season 21 Stanley cup!
Peace: I'd like to say #1- Boughs #2- OnMyCam #3- xTrav89x (Boy was he off except for #1 LOL) And I'd say Buffalo. I have a common name outside the top 3.

Budz: Well thanks for your time this evening man! I appreciate it and enjoyed hanging out with you. It's been a pleasure brother!!!! Any final words for the community this evening?

Peace: No problem man! Was fun to finally get it done! I also enjoyed it and all I have to say is good luck to all the new NHL owners trying to make a name for themselves and to the vets that are trying to keep up their success or turn around their next season! Should be a good one!