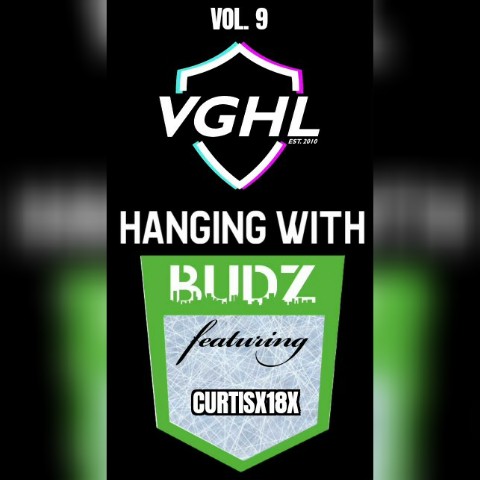 Welcome to Vol. 9 of my weekly Hanging with Budz article!

I hope all my fellow American VGHLers had a safe and happy Thanksgiving!!!This week takes me to Winnipeg during the break to sit down and chat with Curtis from the SJ Barracuda and boy is it a chilly one!

Budz : Hey my dude! Curtis, How are you this fine evening?

Welcome to Hanging with Budz, I'm happy to have you this evening in the heart and cold of Manitoba, Winnipeg!

Before we dive into the hockey side of things let's start with getting to know a bit about you!

So please with that said tell the VGHL community a bit about yourself to start!

Curtis : Hey budz, yeah I'm doing good so far, it's a nice day in Winnipeg little chilly but good. Well this is my second season in VG and it's been going good, definitely better than the last season but then again last season I hardly played.

Budz : Glad to hear haha! So are you a born and raised Winnepeger ?

Curtis : Yes sir, lived here my whole life and it sure isn't a nice city lol.

Budz : Lmao well we can't all be blessed like me loving in Edmonton! A true Canadian thru and thru tho!

Do you come from a big family and a big hockey family?

Curtis : Big family yes, hockey family kind of, I played on my uncles team in tournaments around Manitoba and Saskatchewan with my cousins and brother, we won some and lost some, it's part of hockey. I was raised to play hockey at the age of 5 by my brother and dad. Had great seasons of high school hockey but after that I kind of went downhill with the people I hung out with but that's a long story and something I don't talk about or get into details about lol.

Budz : No worries man we all have skeletons in the closet!

Besides hockey what else does Curtis like to do? Any cool interesting hobbies outside of hockey?

Curtis : Well working and raising my family is a big part of my life but when it comes to free time, I like to play chel or PGA2k.

Budz : Nothing wrong with being a family man at all that definitely takes up a lot of time on its own for sure! How has it been for you during this pandemic??

Curtis : Well I lost all my contracts for work, had to take on a PT job which isn't very good with money but I'm usually at home while the wife does her classes for University in the office room on a laptop and I'm with our baby in the living room. But it does make it easier on us because she doesn't have to travel to the University lol, her classes also help us with income also due to sponsorship.

Budz : Ya it's a tough time across the country and world but glad you are surviving my man that's all we can do is keep moving forward! Being from Winnipeg are you a huge Jets fan? Are you a CFL fan and a fan of your local Bombers?

Curtis : I'm not a huge Jets fan but I do support them anytime they make playoffs, I grew up loving the Maple Leafs and forever a fan since I was 3, so 25 yrs now lol. I do watch a lot of CFL and I'm a huge Bombers fan and seeing the parade was a beauty.

Budz : Ayyy a fellow leafs fan that's awesome to hear! I'm a big CFL guy myself and cheer for the Edmonton Eskimos. Yes I know they dropped the name but they will always be the esks to me! I take seeing the bombers win the grey cup is your favourite CFL moment?

Curtis : Yeah best CFL moment for sure was the recent Grey Cup.

Budz : Awesome dude nothing like watching your team hoist the historic grey cup. I have had the pleasure myself a few times! Thanks for sharing a bit about you outside of hockey!

Now onto the reason we are sitting here freezing in the Peg! The VGHL! I see you are on the San Jose Barracuda this season! How are you enjoying it there? After what transpired in the off season keeping you from going to the NHL and stuck in the AHL still, how has that been for you?

Curtis : Well it's ok in the Barracuda I am happy with the San Jose organization, once I got drafted I was told I'll be playing the AHL due to having 7 games played last season, so I figured ok I only need 8 more games, which was the fact, the fact was I had to redo all my games and get 15 AHL games but it's been a lot of confusion since TBH I don't know if I'm staying AHL now or being called up after my 15 games.

Budz : How has the off season incident affected your season and do you care to comment on what happened?

Budz : Rumours have it there was a deal in place this past offseason to send you to Edmonton but the league stepped in and it fell through putting you in the draft?

Curtis : Oh yeah that incident was a weird one lol, but either way anywhere I go I'm just going to continue to play the way I do. Strong defensive play that I hope leads into points and wins for the Team, winning is a huge part for me.

Budz : As it is for everyone! Where do you see yourself this season? Personal wise and team wise? What are your goals?

Curtis : I would like to play NHL but as of now I feel good about my stats in the AHL also. I just want my defense play to get noticed this season, but mainly that Cup like everyone else lol. I would say I go unnoticed because I never did a tryout in this league before.

Budz : We are 2 weeks underway in Season 20 of the VGHL and you guys are off to a hot start in Cali. Do you see any other team as a contender besides yourself and if so who and why?

Budz : Fair enough haha do you see your team as a Calder Cup favourite?

Who on your team do you see leading the way? That game changer if you may.

Curtis : I do see them as a Calder Cup favourite, the game changer part I dont like commenting that part lol, I would say the manager, trades and signings are huge to a team's success. Who do you think is the game changer for the Barracuda? Like outside of roles, just as a player?

Budz : I honestly don't know the roster well but I have heard Couture is a really good player maybe him? Any comments in regards to him and his play?

Curtis : I have nothing but respect for him, as for his play he is a solid 2 way player and trusts me with the puck which makes me very happy because at first we never liked each other till this season lol, but us together has been real solid, only time we lost together this season was a OTL but other games were wins.

Budz : There have been rumours floating around that you're an AHL quality defenceman and won't be able to handle the jump and level of play at the NHL level. Do you care to address this talk?

Curtis : Nah I don't care about that. I let my stats in the 3 leagues I play in do the talking lol.

Budz : That is the only way to address it and show it my man!

Let your play do all the talking! What have you enjoyed this Season the most in VGHL? What do you look forward to in future seasons?

Budz : Nothing wrong with retiring a champion and going out on top my dude!

Well man it's time for me to head out and wrap things up!

Is there anything else you would like to share with the community before I head out on the road back home to Edmonton?

Curtis : Good luck this season and hopefully we play sometime.

Budz : Thanks for your time this evening man and good luck with the rest of your season. It was a pleasure chatting with you!

ClintonWilcox Impact Slammiversary Review
29 October 2020
An impact of the view and challenge is reformed for the sorts. Mode of the sort and homework cpm is ...