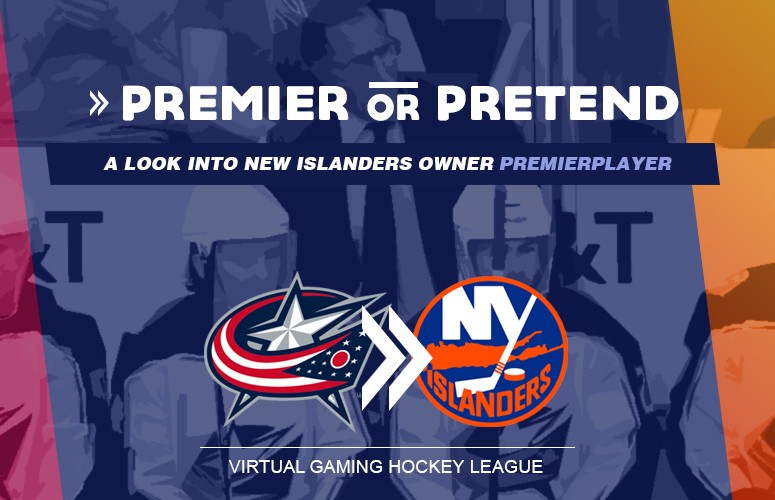 First in position, rank, or importance.

If you're wondering what that is, it's the Merriam-Webster definition for the word premier. Lucky enough in the VGHL we are blessed or some will say cursed with the one and only, premierplayer. (I definitely don't say/think blessed). But what makes someone actually premier in game of NHL? Is it truly their skill level on the ice? Is it those who surround themselves with great players? Is it someone who is great on and off the ice? There are a lot of factors that would go into labeling someone premier, so what would make premierplayer give himself the label? After several unsuccessful attempts to reach out to premierplayer himself, I turned to his fellow owners for some comments.

What is the first word that comes to your mind when you hear premierplayer?

A lot of negative criticism toward premierplayer who in his mind is one of the top players in the league/game especially in the VGHL. Someone who brought a Jack Adams award to Columbus, only to go on vacation with it after the first series of the playoffs. Maybe a name change to averageplayer is better suited for him since that seemed to be the common ground of his skill assessment by his fellow owners. But it wasn't all negative. One owner actually thinks of premierplayer as his daddy since he showed him the ropes of management.

Do you think premierplayer backs up all his talking with his play?

Someone who likes to mouth off in discord constantly needs to be able to back up his take with his on-ice play. Is that the case for premierplayer? I believe premierplayer is trash at the game as his stats show him as a perennial loser and below average player with a few lucky seasons mixed in that got him 0 trophies. But it's not about what I think because my thoughts are only one person and that's not a good sample size. So I had to gage the other owners thoughts and some owners were on the same page with me as one specifically said premierplayer does not back up any of his talk and he is trash. Another said he talks too much and will be successful when he focuses on his own play. On the other hand, other owners seem to think he backs up most of it but maybe not all of it. One owner who really loves premierplayer (why?) said he definitely backs up all his talk as there are others in the league way worse than him on and off the ice.

Would you consider premierplayer below average, average or above average skill level?

This is a question that I was very intrigued to see what other owners thought about premierplayers skill level. Someone that seems to think they're premier and surely talks like it should be able to back it up with his on-ice play by at least being above average. But that doesn't seem to be the case here as fellow owners seemed to label him as just average. Maybe his mouth is getting in the way of his thumbs? While majority labeled him as average and one owner specifically said he is whatever is even lower than below average, a couple owners seemed to think he was above average but specified that he was not at that elite tier just yet. What would it exactly take to get to that next tier, a Stanley Cup?

Do you think GhostMK can take him to that next level and potentially win a cup?

The previous question makes me think, maybe, just maybe, GhostMK can take premierplayer to that premier level and help him hoist the Stanley Cup on Long Island. However, my thoughts didn't seem to align with the fellow owners around the league. Not one owner thinks of the Islanders as a Stanley Cup contender. While many pointed out it would take more than just GhostMK, many mentioned the same road block, the Pittsburgh Penguins. A team that broke the wins record last season while steam rolling over premierplayer and his Blue Jackets 4-1 in the playoffs, then happily getting rid of Smiirk forever before going on to win the Stanley Cup.

Anything else to say about premierplayer?

The owners around the league seem to have mixed thoughts about premierplayer. Some think he's shit and others think he is a very good player. Maybe not at that elite tier yet, but definitely good enough to be talking as much as he does. So that makes me think, are we too quick to judge a player by the way they act? Do other people cloud our judgement and make us believe people are someone they are not? A few owners seems to think you should really get to know premierplayer as he is a very underrated player and a great person. Another owner thinks premierplayer has developed a lot since his first season as an owner as he is more familiar with how to be a manager and who to surround himself with player-wise. While other owner wished him luck this season and thanked him for their friendship that was where the positivity seemed to end. Because on the other end, some think premierplayer is a gossip queen that is too old and needs to retire because he is a trashcan and is only good at sucking VG's "pp".

So now we wait to see if the relocation from Columbus, which was his home for 3 seasons, to the hustle and bustle strong island of New York will benefit the little legacy that premierplayer has on VG. I wondered how could someone just pack up a leave a place you had made so many great memories and unsuccessful cup runs in. Was it cursed by the premature team slogan of "Cuplumbus"? Maybe Ghost wanted a fresh start with premierplayer. As much as premierplayer is a meme in the game of NHL, I love his pick of GhostMK as his captain. Someone I was lucky enough to call my linemate at one time, I can only think of nice things to say. In the end I hope it works out for premierplayer on Long Island, but not really for him, literally if he could somehow lose and Ghost win, I would totally pick that to happen. Anways, let's see if they can get by the 'favorites' in Pittsburgh.

Be sure to check out the VG instagram at mvg_vghl.

Also shout out to Yuck on the amazing graphic for this post. Love you Yuck.