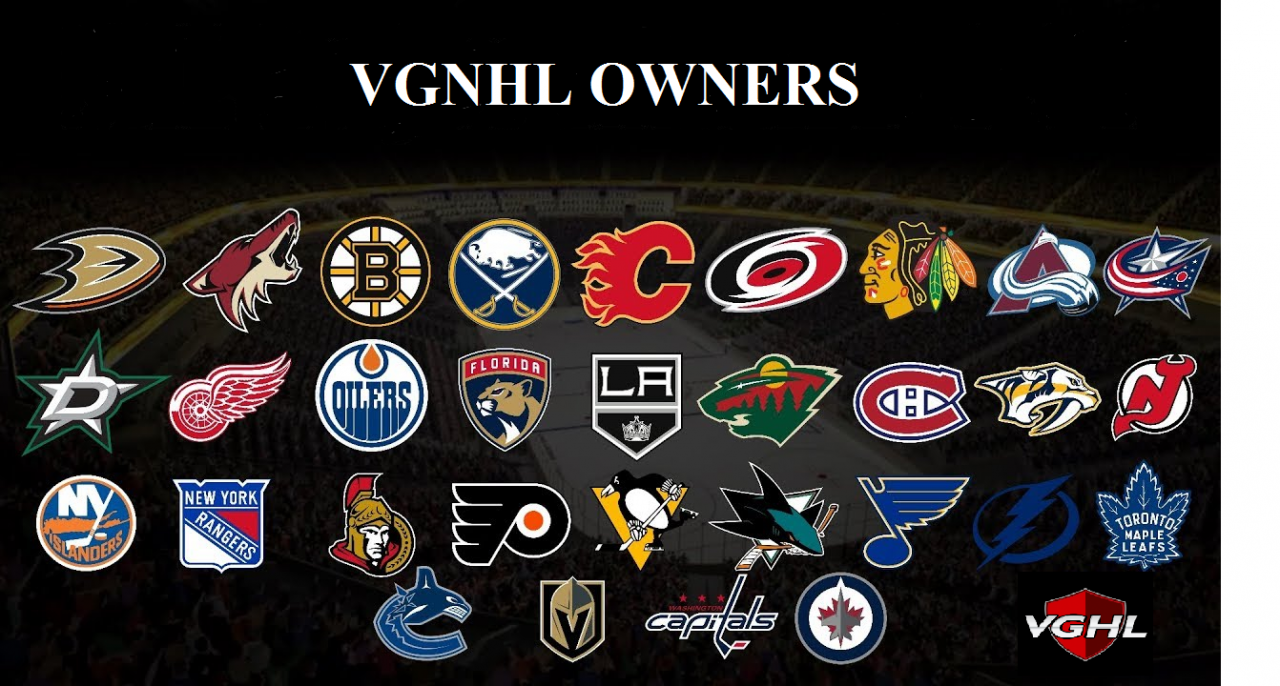 Anaheim Ducks- Rivnasty is taking over a team that has been lacking in VG. Riv has some experience in running successful teams as a captain in NHL and AHL. After a season where he didn't play much now looking to be a bigger role which means trouble for defenses out there.

Arizona Coyotes- Perry is returning after another successful season where his Coyotes took the Pacific Division. Perry's team has been well known for grinding out wins and getting plenty of shots. Perry definitely knows how and will build another successful team this season.

Boston Bruins- Hawkeye is getting out of Carolina and heading to Beantown for a new start. Looks like a rough start in his 1st year it only seems he can go up from 14 wins. Hopefully this is a bounce back season and Hawkeye can be as good as the Avenger.

Buffalo Sabres- Probablekoz decided to stay in Buffalo and grow on his very good opening season campaign. Koz and the Sabres look primed for a solid season this year in a little more watered down Atlantic Division.

Calgary Flames- Freakshow is back in Calgary. The team we all still think of 1 man. After seasons of the Flames being 1 of the top teams in the west they took a hit last year being the 2nd lowest team in VG. Flames can literally only go up from there. Good Luck Freak.

Carolina Hurricanes- SCALZ has officially stepped down as transactions department head and takes ownership. Taking over the reminence of the previous Boston roster 1 thing being said he will have picks. Interesting to see how a higher up in staff who steps down to take a team will fair. Can scalz keep his cool to keep his team in it?

Chicago Blackhawks- Beantwn Beatdwn moving out of the Great North from cold Winnipeg to Chicago. After an early exit to the Coyotes Bean is looking to reconstruct his team to be better vs the teams that are expected in the playoffs let's see if he can successful and get back to the Cup Finals again or is he just a playoff maker.

Colorado Avalanche- Fluri is returning to the Avs and looks to keep building on a successful season being top 3 in Central Division. Solid VG vet and no doubt will be in the mix come playoff time to contend. Fluri can win games so watch out he coming.

Columbus Blue Jackets- Sjackson has returned!!! That's pretty much all the noise we can expect from Jackson as he has had trouble winning in previous seasons. Maybe after a brief time away Jackson has learned what takes a good team and we all love redemption stories.

Dallas Stars- It's Fox…..no not that Fox. So I even looked up stats from last season and didn't see much but could be the site. Otherwise who knows what to expect from Fox. Some of his AHL stats looked decent but all small amounts so let's see a true wildcard here.

Detroit RedWings- Sauce is back another returning vet. Always good to see previously good owners return. Sauce can help any forward line and if he gets some running mates watch out Atlantic. Also watch out for Sauce's sauce sorry for the stupid pun.

Edmonton Oilers- Budz……. So after being the butt of jokes a plenty inside the managers ending with above 500 record is still success. Progress before perfection. Hopefully Budz can be competitive this season because since the calder cup its just a lot of talk thus far.

Florida Panthers- Burns has returned. After a rocky start to the season Florida came on strong and became legit. Burns is another NHL owner who also owns a Calder cup even though it was awhile ago. Burns can build teams and expect this team to be there come playoff time.

Los Angeles Kings- No longer the domain of roller and Mills. Yesc is coming into some big shoes. Kings have been a top contender from pacific division now lets see if he can continue their winning ways and if he does I suspect it will be in a different way than Pig and Mills.

Minnesota Wild- Heroic is back…back again. This season he will have the opportunity to build on his trip to the Finals. With no Fox as captain the defense will need to be addressed which he is more than capable of doing. Wild should be a top team in West.

Montreal Canadiens- Pucky is taking on the polarizing team in NHL. There definitely no lukewarm water for MTL you either love or hate them. When pucky ran his AHL team they did well as was his personal stats. Although seeing some personal stats from last season it was rough so hopefully this season is a good turnaround for him.

Nashville Predators- Deadly had all the pieces last season he ever wanted on his team and came up a little short. Now this season he is more than determined to make it to the Cup and bring one home. Preds are obviously going to be in the discussion of cup contenders.

New Jersey Devils- BrandonSniper is back to running the 666. Another owner who struggled early but turned it on especially when Isles was brought in as his captain and looking to keep that momentum going into this season. No doubt will be in the playoffs again.

New York Islanders- Premiere has decided to leave cuplumbus and go to the Big Apple. After proving his 1st season was a mirage Premiere has now finished with a solid record 2 season in a row maybe he can bring the Islanders to a cup? It will be hard as his division is solid so good luck.

New York Rangers- Scarface is back for another go in New York. Will this be the season where he can win some games? The more likely scenario is that he will miss playoffs but who ever knows in preseason. At the moment he is as even as Pit but how long will they keep up?

Ottawa Senators- Kaxo is here to take over the most controversial team in VG since season 11. An above 500 owner in AHL now sets his sight on gaining traction in NHL. It is always harder at the NHL level so hopefully he can put together a team to atleast do what he did in AHL let alone live up to the Sens reputation over last few seasons.

Philadelphia Flyers- JCE is back to ownership and hoping to turn around a pretty ugly season. 16 wins in a season is definitely not what your looking for but maybe this season will be different but till we see how the team looks I wouldn't get to excited unfortunately.

Pittsburgh Penguins- So Reli aka Malkin is back in Pitt and lets be real he wasn't going anywhere now that he is in Pitt. I know getting the cup last season was something he has been after for many seasons. Almost the whole league would be glad to see someone who has worked hard for VG to get a chip congrats now REPEAT IF YOU CAN!!

San Jose Sharks- New owner scroth……I mean what can I say I looked up some stats and wasn't impressed so I have no clue how this happened. I foresee a less than 10 win season and I don't take any pleasure in this. Sharks will be getting eaten all season. Sorry Scroth.

St. Louis Blues- So leaving the Red Wings to come to the central division what were you thinking? Jackbauer has decided to come out west hopefully donating the full amount to take away the cap he would have to take on for this move. Hopefully the move proves smart but time will tell.

Tampa Bay Lightning- Arpineoq has taken over the mantle in Tampa from Wally and Exe. He has had some success in the AHL running the Tampa AHL team last season and who would know the organization better than the previous AHL Capt. Hopefully the success that was started with Wally and Exe can keep up with Arpineoq.

Toronto Maple Leafs- Rich and Vega you can't get one without the other Love and the marriage. Sorry for going off on that tangent but these 2 have been joined at the hip since what feels like ever. Always consistent playoff team lets see if they can make the jump to the cup.

Vancouver Canucks- Crimson has returned to Vancouver after a less than spectacular season. Last year was a struggle but with a pacific that could be up for grabs that 3rd spot will be a fight. Maybe after the learning experience last season Crimson can put up a fight this season for a playoff spot.

Vegas Golden Knights- PNC made the playoffs again finally and it only took him giving up his penguins to go to a less than stellar division last season in the pacific. Was last season a mirage or can this historically overpriced goalie keep his spot in the playoffs this season?

Washington Capitals- Popeskill in Washington? I mean he is not the only curious ownership choice as he hasn't been captain for awhile and his personal stats are not something to write home about. I do hope VG knows what they are doing here. Top team in real life but a possible bottom team here in VG.

Winnipeg Jets- Killinit420…..I really have no words to 2 subpar seasons in AHL he now gets the chance to run an AHL team. Just hope this team is full of friends because this could be another less than 10 win team. I do hope I am wrong about everyone who I said this about but it wouldn't shock many people.

0 Cancel Reply
No comments made yet. Be the first to [url=http://random-name-generator.info/]submit a comment[/url]
Cancel Update Comment

Josefsborne Season 17 WTF
10 August 2020
Reality check for season 17, See the page because I know this really is useful and you also get diff...

CClark1999 VGKHL Power Rankings
15 July 2020
It was till he got banned for intentionally FFing games even after he was warned, lmao.