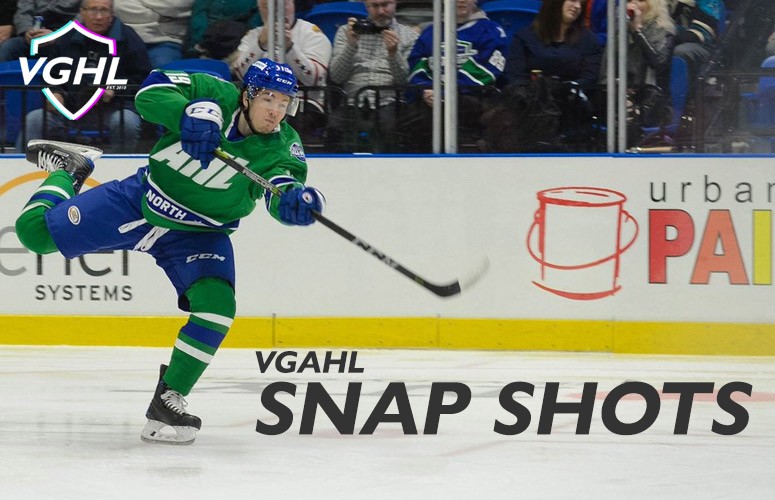 Image courtesy of the VGAHL.

​The title is not a reference to that awful Tim Allen show, it's the title the second song on Rotting Out's 2020 album "Ronin". That thing is a god damn RIPPER.

So NHL 2021 is reportedly delayed, yet still being slated for a Q3 release this year. With that announcement, I wonder if VG still progresses with the KHL this season. I also wonder if they use old SummerSlam graphics to promote it throughout the entire season. Why don't we just make it a tradition to use old profession wrestling promotional material to advertise what's going on in the league? I mean, we would probably break a few copyright rules, but imitation is the most sincere form of flattery, right?

As of Wednesday, May 6th, 2020, we have crowned the winners of the Calder Cup for season 19 of the VGAHL. 31 teams vied for the most prestigious title of the second highest level of competitive hockey, but in the end, only one came out victorious. They did so after a grueling six weeks of regular season play, filled with teams collapsing (why hello, Marlies!), management being fired and/or banned, accusations of cheating, personal attacks, threats of off-ice violence, and much more fun stuff!

When it came down to the playoffs, the wheat had been separated from the chaff and 16 of those aforementioned teams battled it out over seven game series. We saw the Macgregor Kilpatrick trophy winners eliminated in the first round, we saw Cinderella stories intertwine and collide, and saw powerhouses square off in search of the VGAHL's greatest prize. Unlikely heroes rose up and guided their teams to success, but ultimately, only two teams could make it to the Calder Cup finals.

Those two teams were the Hershey Bears and the Tucson Roadrunners. While the Bears were on top of the standings all season long with their unrelenting offense, the Roadrunners made an impressive run to earn a playoff spot by sneaking into that second wildcard seed in the West. The Eastern Conference provided Hershey with a challenging path to the finals, going through the scrappy Bridgeport Sound Tigers team, the seemingly impenetrable Charlotte Checkers, and the antagonizing yet effective Rochester Americans. The Roadrunners were the team that knocked off the previously mentioned Macgregor Kilpatrick victors in the Utica Comets, then upset the dominant San Diego Gulls, and ended the feel good story of the Rockford Ice Hogs.

With our teams set and our stories told, let's dive into this series!

What Happened: Chris hasn't had the best luck in these playoffs. His record in net before entering this series was 1-3 and this game made it 1-4 after giving up 5 shots and 10 goals, while the Bears had only 4:32 of time on attack. Snipeshotty had a 7 save shutout for Hershey, while the management team of Capitalsfan and YoungBoog each had 2 goals as the Bears ran away with the first game of this series.

What Happened: while the Roadrunners found their offensive footing and managed to reduce the Bears goal total, it still wasn't enough as Hershey took their second consecutive game. Dominator saved 12 of 16 shots for Tucson, while Boily found the twine for the first time in this series, but the depth of the Bears team proved to be the difference as Marty, Crashman, and DCLight all had multi-point efforts in their first game in this series.

What Happened: Dominator continued to show his namesake in the crease, saving 13 of 15 shots as the Roadrunners got their first victory of the series. Blades, the regular season leading scorer, made his series debut in this game for the Bears and scored their only two goals, while Boily and PerfectSkillz combined for 2 goals and 6 points. The penalties were the difference in this game, as Tucson converted on two of their three powerplay chances.

What Happened: another two goal performance by Blades and a three point (2G, 1A) game for Boog allowed the Bears to break the trend of home team victories in this series, as Hershey pushed Tucson to the brink of elimination. The Bears were firing on all cylinders here, peppering Dominator with 21 shots over their 8:20 of time on attack. It really was top line versus top line in this one, and the Roadrunners top pairing of Angrod and Killerz being no match for the Caps-Boog-Blades combo against them.

What Happened: on the brink of elimination, the Roadrunners went down 3-0 after the first two periods. After scoring two in the third period, the Bears scored one more to put the nail in the coffin, winning game 5 with a score of 4-2 and winning the series 4-1. The Bears mauled the Roadrunners in this game, more than tripling their time on attack and doubling their shots. Blades and Marty both had 2 goals and an assist in this game, while Boog added two assists to a phenomenal 5 game series for him. Boily sat this game out, the only one of these playoffs, and watched his team kiss the Calder Cup goodbye.

Congratulations to the Hershey Bears on winning the Calder Cup and the title of the best team during season 19 of the VGAHL. We talked about how superior this team was throughout this series of articles, and these playoffs proved no different. Caps and Boog built an offensively overpowered team with Blades, Marty, Crashman, and Mikeh backing up their offense. On defense, CT83 lead their defensive core that employed top-notch blueliners in DC and Josi, as well as Pelly in times of need. In net, Snipeshotty and Chemtrails battled all season long for the starting position, and while Snipe emerged as the starter and lost 3 games out of the 16 he played these playoffs, Chemtrails more than handled his duty when called upon.

This is unofficial and will later be decided by the VGAHL awards committee.

Nobody played more games for the Bears these playoffs than Boog, playing in 21 of their 22 games. Over the course of that campaign, he scored 20 goals and matched that with 29 assists. He scored on 30% of his shots, and 4 of those aforementioned goals were game winners. In the Calder Cup finals, he had 4 goals and 5 assists in four games, leading his team with 9 points. Boog lead by example throughout these playoffs, and in turn won himself a Calder Cup ring and in this humble journalist's opinion, the Jack A. Butterfield trophy.

That closes the book on another season of the VGAHL, and I would like to extend my congratulations to the Hershey Bears, as well as the Tucson Roadrunners. Chris and Hamanator put together an incredibly good team in a short period of time as they turned their season around when it mattered the most. They went on an improbable playoff run that resulted in the Western Conference championship. While a finals loss is never fun, they have to be proud of their accomplishments over the past month.

That's it for me for now. I would like to thank xCremeBrulex for allowing me to contribute to the VGHL in this capacity over the course of this season, and I would like to thank you, the audience reading this. I find the minor leagues often get overlooked in regards to media coverage, so I was proud to take some time and provide some insight and analysis on the league. I appreciate everybody who provided feedback, showed their support, and chirped me on my comments and predictions this season.

We'll see you when the VGAHL returns, enjoy your summers everybody!

Gg hershey, u deserved it !

Buyinstagram Monday Night Raw Review 8.10.20
11 September 2020
The home of competitive online hockey. Brought to you by My Virtual Gaming. SHOP NOW ... by epicfoll...

Katherineimmons Retirement letter
09 September 2020
We can see those goats getting a charge out of new briers which is particularly key for their flouri...

Katherineimmons Retirement letter
09 September 2020
I get a kick out of the opportunity to examine about you are splendidly shocking individual and your...