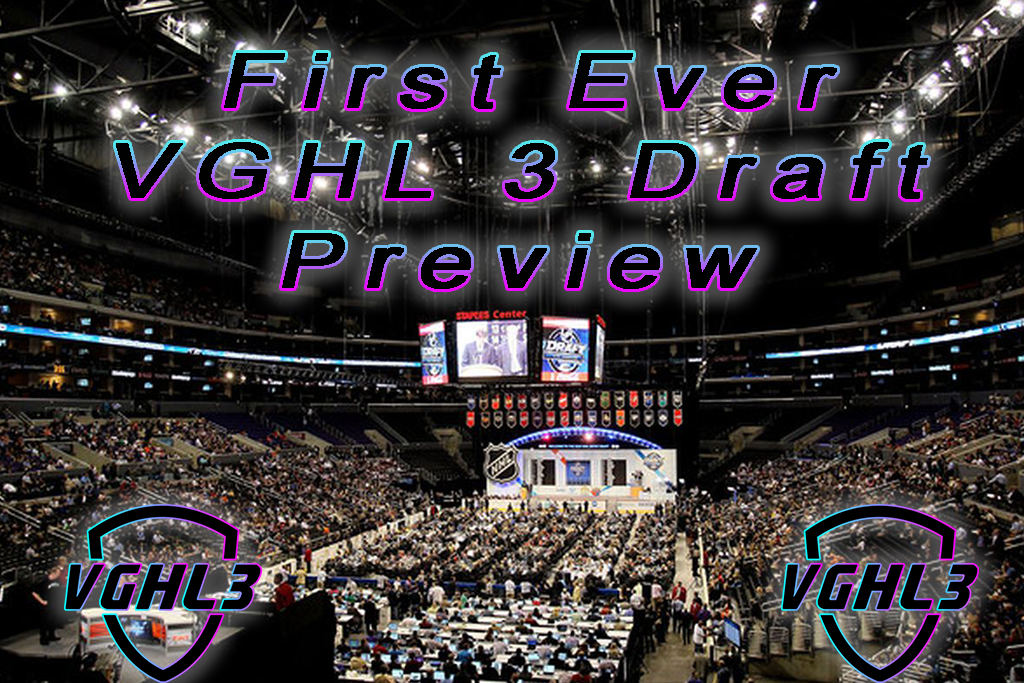 THE VG UNIVERSE IS WATCHING!!!

Welcome everyone to the FIRST EVER VGHL3's season. We have a wonderful season in store for you all as the 16 founding owners are in the process of scouting for the upcoming draft on June 30th at 9 PM Eastern Time. Just a quick outline of the timeline for our very first season. We have the draft on the 30th, but in order to be eligible to participate in said draft, you must sign up on the vghl website (vghl.myvirtualgaming.com) and edit your gamer profile to say that you would like to play in our 3's league. We have the FINAL updated draft list coming out on June 28th, and the Draft lottery happening on the 29th. For those of you who unfortunately do not get drafted or miss signups, DO NOT lose out hope. As random assignments to teams will take place on the 3rd of July, just in time for you to get looked at by your owner and perhaps be called up for opening night on July 6th. Managers, the trade office will open the 7th of July, just in time for you all to get rid of toxic players in this fun, carefree, competitive environment. Beware though, the trade office is only open for 18 days, so make the moves count. Finally, our season will end on the 7th of August with playoffs starting up on the 10th of August. Key thing to note here, is if you think budz is annoying, sign up and you won't get tagged everyday.

Now in order to have a league, you need teams, and to have a team you need an owner. So let's meet the inaugural 16 owners who have graced us with their presence and have taken the time out of their days to provide you a great experience in VGHL!!!

Tampa Bay Lightning- Bufford80; Extremely nice guy. I had the pleasure of playing with him in SPNHL when we won the cup and he is a class act and a great representation of the values we hold in VGHL

Buffalo Sabres- Webber1786; From my perspective, not much is known about Webber, but from what I have seen so far, like Bufford, is also a class act.

Pittsburgh Penguins- Jewell_2112; Often outspoken, Jewell is very active in the VGHL3 community albeit it being the early stages. So whoever ends up there is in for a treat

Detroit Red Wings- IiiIMessiahIiiI; Very few managers have the toxicity and charisma that Messiah does, he is also a perennial playoff hopeful every season

Columbus Blue Jackets- Airbusdoc; A PHL owner from this past season, not much is known, but from the looks of it, can be toxic if provoked.

Toronto Maple Leafs- Krusey55; a staple in the lesser known leagues, Krusey has countless management experience, also is a class act, will treat you right if you end up on Toronto

Vegas Golden Knights- Khaos Mouth; Not much is known from khaos, has barely spoken a word in vghl, in fact his assistant papa smurf has done all the talking

Calgary Flames- Blakemac; An experienced owner in VG but had a tough time this season in Laval, availability was an issue they could not over come

Montreal Canadiens- Fragster-67; Very unknown, but what a way to start your VG career, already making history as an owner in VGHL3's first season!

Winnipeg Jets- Prxmeau; Also new to vg only 4 games of experience, but he does have Datsy by his side and if I know Datsy, he's already got his picks laid out

Florida Panthers- DTurp; A notorious westy. Throughout all of VGAHL this season he was known for putting out west lines, so if youre on the west coast. Hit DTurp up!!!

Edmonton Oilers- Ilovedyour_mom; A very young owner, which might attract young up and comers to him. Along with skillz in net this is going to be a strong team

Anaheim Ducks- Playboicentericeg; An experienced Owner who is currently in the AHL playoffs right now in the conference finals. Great guy, great personality

Boston Bruins- ShadyKO4; Another stand up guy, he is currently in my faction for our wrestling discord. Shady is extremely wise and confident.

Minnesota Wild-Dxmko98; Caleb does not have VG experience, and also quit during the PHL season tourney this season, do not know how he is management.

Washington Capitals- c-fo-fizzle; Fizzy has been around VG a great long time, and knows how to succeed in this harsh community. Wise beyond his years. Listen to every word and you'll go far

Before we get into what everyone wants to see. I thought it would be cool to bestow a pre-draft power ranking and cup favourites section upon you all. Now this is my opinion only and reflects what I know about the managers from all leagues and their level of play. So if you believe you should be higher, prove me wrong. Nothing but love and support.

Early season predictions for the cup finals, Winnipeg vs Detroit.

These are your Season 1 managers for VGHL3. Now we must stress, there will be people that are not happy. It sucks, but people sign up to play with buddies and people they know. So if you get drafted by someone you don't know or don't like, just don't quit give it a chance. These owners were selected for a reason, they are the pride and soul of VGHL3 and will do anything to make your experience here an enjoyable one.

As you can see, there were a lot of goalies going in the first two rounds. The goalie position is not as deep as you'd hope for threes but a solid trap and defense can turn the worst of goalies into vezina winners.

This is it for my first VGHL3's article. I hope you all enjoyed the read, remember, stay positive, bury the biscuit, and most of all… HAVE FUN. I am looking forward to seeing you all out on the ice and this being a competitive season. I shall catch you all later. Good Luck to all involved in the draft!