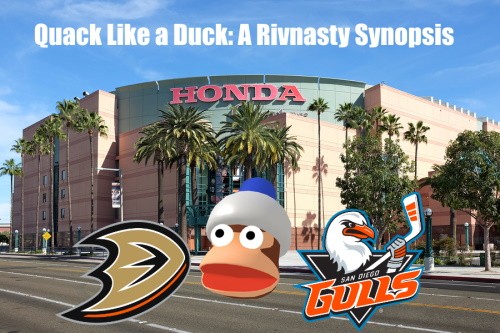 This season has already started off HOT and we aren't even on opening night. There has been controversy at every turn of the draft and bidding. In this piece I am going to focus on the Anaheim Ducks Organization which is run by Rivnasty.

Riv is a controversial owner as he comes over from another league in which he was banned. Although he continues to claim his innocence my sources have confirmed that where there is smoke there is fire and that Riv is guilty as charged.

* Used an NHL Level player who was a late signup and stuck in a lower league as a Game 7 ECU when other players on his team were available.

* Caught signing up into the lower league and playing on another tag after being banned.

That team that Rivnasty had won the virtual cup yet it will forever be tainted. Despite all of this baggage the selection committee decided to give Riv a chance at VG ownership. Riv's first move was to hire his close friend Nieler AKA Cage. Cage is also banned from the other league due to cheating as well. Cage caught a ban also for playing on someone else's account which was exposed in direct messages and which he admitted to.

The dynamic duo of Riv and Cage were quick to get to work and plan out their team for the upcoming season. After looking at the signed up player list they determined they would have a different approach to bidding and bring in friends and people not known to a lot of the VG community.

Ebonyfetishz was the first target. He entered VG bidding with his known PSN account so people were able to get a jump and his price started to climb. To counter this Riv sat in the Discord General Chat throwing smokescreens up about how Brad would not play for certain teams, or how he is a known quitter and even once quit on JClaus. He worked hard to let everyone know Brad had signed up only for Riv and he was determined to get his friend. Bidding on Ebonyfetishz closed at 6MILLION which was a fair price. Riv got his man and Ebonyfetishz is on the Ducks.

The second player Riv targeted was Chyznasty who played VG last year. In an attempt to hide from managers Chyz proceeded to change his VG tag to Postandin74 and move his availability to 3-5 games in an attempt to keep his bidding price lower. The postandin74 account was not created on PSN at the time and was not a real account until after bidding when he was told his 6v6 tag needed to match his registration. Most GMs knew this was Chyz during bidding but avoided him due to fear of him refusing to play. Riv again was in chat trying to play down Chyz and who he would play for or ego. Eventually bidding for Chyz also closed at 6MILLION. Riv and Cage now had 4 of their top 6 players locked up. The duo filled out the rest of bidding with low budget players leaving themselves with slightly over 5MILLION left in cap.

Due to no PHL, the AHL kicked off with a flurry of players with no VG history getting bidded on. While managers went wild on bidding one know user the chel community for them to focus on was Lehk. It was clear from his chat which team he wanted to play for. Signed up as LD/G and 2-3 games Lehk sat in chat trying to deter his bidding by threatening to quit if he was forced to play goalie or didn't end up on a team he wanted. Some managers were willing to take a risk at lower prices but as his salary inflated to 3.5. When the timer ran out the Gulls logo flashed across the screen and he was part of the Ducks organization. Lehk will be eligible to be ELC call up to the NHL roster after he plays 15 games in the AHL.

The final piece of Rivnasty's master plan was probably the most controversial. Managers were asleep as Gry089 went for 1.5 in bidding. Upon the bidding timer closing people started to notice this user was actually a top player xNav. xNav has also been banned multiple times from other leagues. As people dug into this profile when word got out people noticed that nav had changed his VG tag to Gry089, which as of the morning was not an actual PSN tag. It was a fake name change to try and deter people from bidding on him. His profile still listed xNav in his club tag, but his main tag had been changed and AHL managers did not dig deeply into this account to notice or care. Since a players 6v6 tag needs to match their PSN there was a race to create this Gry089 tag from some other managers which would have essentially locked him out of playing. Nav beat everyone to the punch and was able to secure his PSN tag. Riv had his final piece to the Rivarmy.

VG Staff did not seem to care that fake accounts were being used to deter people in bidding. Managers seem to be blamed for not going through every account on the list and checking for any previous tags. This type of shady behavior from players and owners continues to be allowed and there is clear divide among everyone in VG about these types of tactics.

This type of behavior doesn't only affect other NHL teams. Riv's own AHL club will feel the pain from this as they have a third of their cap locked up on these two players. Once Riv calls them up they lose their top 2 players and will be looking to fill their roster with players off the street. The AHL team is just being used and abused. This normally isn't a huge deal when new players have to come through the PHL first but due to no PHL to start again the ability for players to quickly get from AHL to NHL has caused this more dramatic problem.

We interviewed multiple long time and well respected managers who were not happy with this situation and are currently talking about leaving the VG community. They feel that staff does not police this type of behavior or do anything to curb it. To them it gives them pause at owning a team and left wondering if it is worth it to take their personal time to run a team only to eventually run into other teams who are going to any level to get ahead.

This is just one specific focus of some of the integrity issues that have gone on in VG lately. It leaves a black mark on the league in general in a lot of people's eyes. Even if people are not as vocal as myself to these issues others do take notice. If VG wants to grow it needs to get rid of players like this who want to go to any lengths to stack their team. I feel like Rivnasty is making a mockery of VG right in front of staff's face and nobody wants to step up to the plate and take back their league. Until this happens VG will continue to be on the edge and close to falling off the cliff for good.

Please reach out to me via the VG Discord if you would like to discuss this issue or any other integrity or cheating issues you feel need to be brought up. Thanks for all of your time.

I mean he was banned for second tagging in lg chl rapid city rush and in fact there was three involved no?

0 Cancel Reply
I mean he was banned for second tagging in lg chl rapid city rush and in fact there was three involved no?
Cancel Update Comment

Imagine being 39 years old, living for it this much and still being absolutely trash at the game and know 0 about anything. Truly tragic.

0 Cancel Reply
Imagine being 39 years old, living for it this much and still being absolutely trash at the game and know 0 about anything. Truly tragic.
Cancel Update Comment