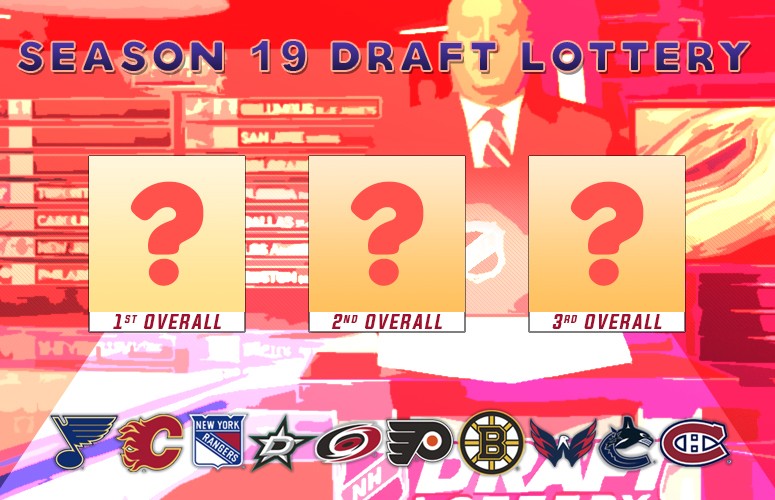 ​With the draft lottery right around the corner, I, Kaxoman, owner of this seasons Ottawa Senators thought now would be a good time to write my first article as a member of the newly revived media team. Today we will go over the top five lottery teams, what their odds to get the top pick are, and who currently holds the pick if it's not in the hands of it's original owner (Spoiler alert- None of them are.) Instead of a conventional countdown, let's go in draft order, shall we?

#1 with an 18% chance in the lottery we have The St.Louis Blues. St.Louis, run this season by Jackbauer (relocated from Detroit) who as it seems has decided to bring along his assets from Detroit. So as it currently stands OlivierLC122's Detroit Redwings have the highest chance of obtaining the first overall pick.

#2 with a 12.5% chance of bringing home the first overall pick we have The Calgary Flames. Calgary however does not hold the right to their own pick which is currently sitting in Boston. Boston is being run this season by Hawkeye who as it stands has a plethora of first round picks, four to be exact. With none of those picks being their own. What will Hawkeye do with all those firsts? Will he trade some away if he can land the #1 or 2 overall pick?

#3 with a 10.5% chance of obtaining the first overall pick we have The New York Rangers. Once again however, New York does NOT hold the rights to their own pick and instead we look to Carolina who's original pick is now projected #5, seems to have made a smart decision somewhere down the line essentially trading up two spots to #3... if the projections are correct that is.

#4 with a single digit 9.5% chance of getting the first pick, we have Dallas. Who, surprise surprise does not own the rights to their own pick. Who does own the Dallas pick? That would be Montreal. Pucky who is taking over Montreal this season, is looking to bounce back after having a tough start in the NHL last season. He found great success at both the PHL and AHL levels when in a management position. I'm sure he will find great value in having this asset as he begins rebuilding Montreal.

#5 with a decent 8.5% chance is Carolina. As I stated earlier they do not have their pick and instead it is held by the same team that holds the projected #2 overall pick, the Boston Bruins, who have a total of four lottery picks. Boston is holding the projected #2, #5, #9 and the #14 overall (Projections) picks. Boston have an absolute haul of quality first round picks to play around with and I can't wait to see what Hawkeye has in store for them.

Stay tuned to the MVG site's draft centre ( vghl.myvirtualgaming.com/vghlleagues/vgnhl/draft-centre ) to check out the draft lottery stream which is scheduled for February 3rd @ 9:00pm.

xXM1NORTHREATXx VGAHL Season 19 Snap Shots, Volume 1: Nice To Meet Ya
25 February 2020
man, Serv and I fucked up a bit and overpaid Minor but that's okay!Agreed

mcleve913 Quack Quack Quack
22 February 2020
Bro if they updated the rule book due to your shenanigans, the shit was shady af... GG

NHL_Jesus Quack Quack Quack
22 February 2020
"That being said, being mad at the ban I did create another account on LG and play in CHL in season ...

SMiiRK-_- Quack like a Duck
22 February 2020
Imagine being 39 years old, living for it this much and still being absolutely trash at the game and...