The Sinking of the VGNHL Pacific Division 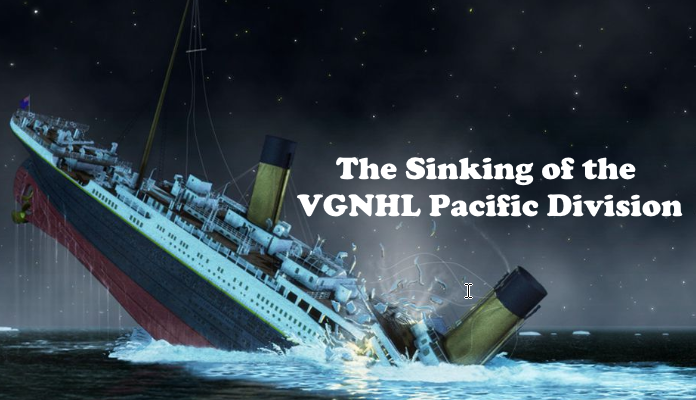 Arizona
Perry and Max lead the way for this french squad. Perry with the questionable choice with Max due to his known IP booting and racism through the community however Max is a solid player and worth the salary. Through bidding they have again loaded up on the forward position with players like Powerzzz and Styles007 however neglected the rest of the roster. They have a very limited d corps and marginal goaltenders. It will to be seen if the offensive power can get them through the playoffs when they match up vs better teams.


Anaheim
Budz and MrMVP pair up to form an unknown combo. The Ducks are really relying hard on Rasta and Chara to be their top pair. Both have full availability so if they show up most games the Ducks will be okay on the back end. They have their work cut out however since Budz claims its never smart to pay a goalie. We will see as he rotates through a group of sub 80% save percentage scrubs.

Calgary
Freakshow made his first big splash by moving Gucci to get himself a top pick in the draft in WhiteMike which was a somewhat questionable decision considering how poor the draft was. In bidding him and Canate really focused on re-securing Snipeshotty for 7 million. Paying a goalie this amount is always a questionable move especially when it is someone who refused to resign with the team. A negative Snipeshotty could spiral the team moral quick and next thing you know Puckzone will quit again.

Edmonton
The Oilers were left in shambles from previous management and MrLOLChico is here to pick up the pieces. His captain RiseoftheNinja is their best player who is coming off a stagnant season with Buffalo last year. Twnspepsi is a low key solid pickup and bringing in Matthout with full availability since being banned from LG is helpful. The Oilers however are in trouble as they don't have much defense and are already shopping around to try and strengthen the back end.


Los Angeles
TMills/Rollerpig got their hands full this year. Having Malkin move his squad to the Metro helps them as their current roster is nowhere strong enough to win a cup in it's current state but they could tread water until the deadline and make a splash. Both of their goalies are on the lower end of availabilty and if their availabilites don't mesh LAK will be struggling early. Losing FFrantic is also something to keep an eye on as he was a reliable higher end player whom it doesn't seem they have replaced yet. Cressor asks for a trade by Week 3.

San Jose
Rivnasty and Dshann cannot carry the rest of these guys. The smartest thing Dougie did in bidding is maxing out his roster size so he hopefully doesn't have availability issues. Outside of that it seems there was no real plan in bidding. Juul should change his name and stop smoking that shit is bad for the lungs. Riv sneaks a trade to a cup contender at some point. Dshann goes full Musty. Juul sends Dougie a full moon.

Vancouver
This team that Crimson and Visibilty built is ripe for a disaster. Daf is a strong goaltender but could check out early. Relying on Hellaselite to do the pinwheel in goal all game is a good way to lose every game. Noles was a good draft pick and DPtickler on .625 is a steal. KB could be a sunk cost at 9 million. He loves to play the game but could be demanding a trade early. Vanouver is another team that didn't focus on the back end on defense which is baffling considering they have left themselves with over 6 million in cap. This is the only team I could see who has the capacity to trade for RVClutch later on by moving KB for him.

Las Vegas
PNC swapped teams with Malkin so he now brings his talents to sin city. I honestly don't know anything about this roster. Outside of Prodigy and Bdeez there isn't much there. PNC at least attempted to solidify the back end by overpaying DonkeyX. Their draft pick Dumais had a great season last year but he played on a stacked AHL team, so how they translates to this level we don't know. The best thing Vegas has going for them is they are in the Pacific and none of these teams look to be strong. I see a lot of parity among them.

I loved the way you discuss the topic great work thanks for the share.
five nights at freddy's unblocked

0 Cancel Reply
I loved the way you discuss the topic great work thanks for the share. [url=http://fivenightsatfreddysplay.com/]five nights at freddy's unblocked[/url]
Cancel Update Comment