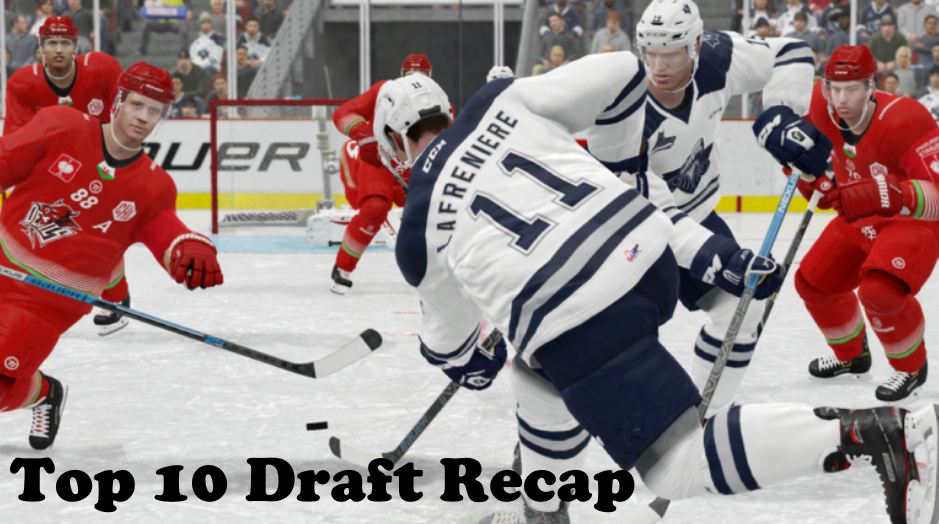 After the rape and pillage of Musty's Blue's, Scy set up the new owner of Vancouver with the #1 pick. Despite Rivnasty playing off like he wasn't going to be involved in VG this season it was no surprise for him to be selected #1 and rejoin the chat. This smokescreen to try and deter teams from taking Riv so he could go to a friend's team didn't matter once Clamps was announced as ownership for Vancouver.

Snake somehow slithered his way into a top pick before leaving his team to new ownership. Returning superstar GreekElite got a gift with the second overall pick where he selected Capitalsfan. Capsfan put up almost 4PPG in his limited appearances in the PHL. Getting him 20 games in the AHL for a callup should be the priority for Philly.

Tekniks left the Canadiens in shambles and poor asleeptech had to watch as the 3rd overall pick for Montreal was moved to Florida. (A common theme of top playoff teams somehow being in the top part of the draft). With the 3rd Pick Florida snagged P_PO_Patches, a veteran D who is fresh on the VG scene. While PPO is a solid D at AHL levels it is yet to be seen if he can handle some of the top end players in the NHL.

I am not sure what Rich and Vega moved to get the Wild's draft slot here but I am sure it was trape without even looking. With the 4th pick they got NHL veteran McInnis_91 who is a very solid player. He can play F/D at this level and is a nice piece to add to a returning playoff contender.

Montreal finally gets a pick in the top 5 and they select Steph-X4. Not really sure who he is and this seems like a huge reach with some of the other names on the board. Steph's AHL numbers are a bit questionable even for a D. Limited point production against all of that bad competition even at D is a little bit striking.

The Wings held Ottawa's pick here are picked up longtime LG player X_Jedi_x420. A real solid depth piece here at six. Although he is a AHLO contract getting him 20 games should be easy so that he can be called up. Jack already has that 2.5 Million in cap space waiting for the ELC

Texas held pick #7 from a trade with Washington which continued the trend of playoff teams pillaging bad teams for their top picks the following season. Johnkenney here is a steal. Almost 5PPG against the bad PHL and AHL. John is a known commodity and top AHL player. Will that translate to the NHL here? Probably. His draft stock did fall slightly because attitude concerns and our prediction here is that him and Curlew won't get along and he is traded by Week 3.

Buffalo at 8 took a flyer on Krvs. Solid player who is used to playing NHL level. He is stuck in the AHL for 20 games before a callup and we aren't sure with his current attitude that he will stick around for a team he doesn't have friends on.

Columbus took a flyer here on Mayor_35 based on their deep scouting network. Mayor will help improve the depth at D for Columbus as they look to make a move to become a playoff team. While most questioned this move and considered it a reach it was important to the Bluejackets to get a pair of one way roster players that they did not have to wait to graduate.

The Bruins and Bluejackets were the only 2 teams who's Top ten pick was their own. The Bruins had a similar approach with their pick as the selected kickass8000 to help secure their back line. Kickass was on one of the top teams in the AHL (until their playoff choke). Kickass is sort of a basketcase and it will be interesting to see how he handles having Oneshot fly the zone all game. Bruins will be banking on their veteran admin Scalz to keep the locker room in check through the season.
Facebook Twitter LinkedIn Pinterest Reddit
How do you feel about this post?
Happy (0)
Love (2)
Surprised (0)
Sad (0)
Angry (0)
Tags:
teams season VGHL ​​​​​​​​​​​​​​​​​​​​​​​​​​​​ - ​ entertainment
Section 2. Page 1. Report of Truth
Section 1. Page 1. Introduction to The Truth, and ...

Amazing recap! Now do one on the true S17 sleeper in the NHL


0 Cancel Reply
Amazing recap! Now do one on the true S17 sleeper in the NHL [img]https://media1.giphy.com/media/LLXuaMxn4r3K8/giphy.gif[/img] K thanks
Cancel Update Comment