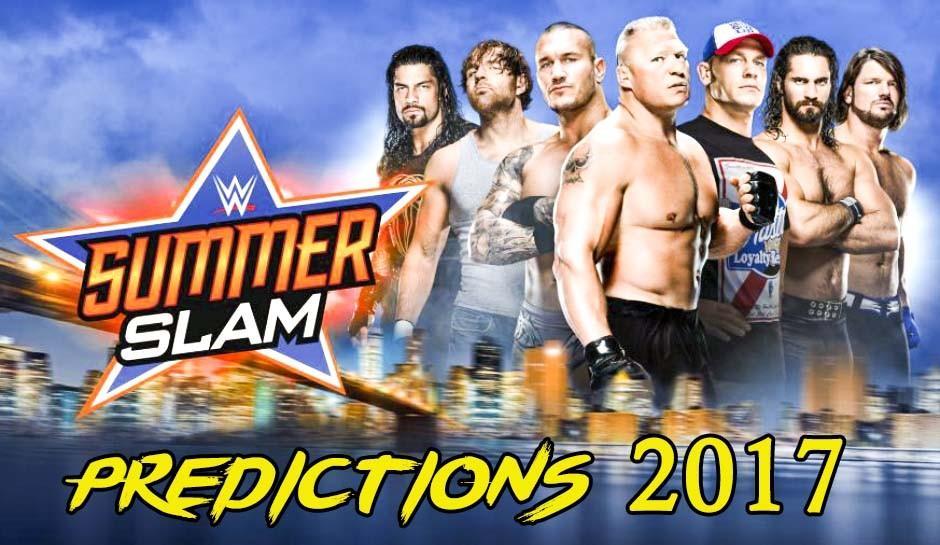 As we approach the summer's biggest event, SummerSlam, we have some quite interesting scenarios to examine. Will there be new Woman's champions on both brands? Will Nakamura beat Mahal to become the first Japanese champion in WWE history? Will Rollins and Ambrose channel their inner Shield enough to beat Sheasaro? All this and more will be discussed in my preview for SummerSlam.

First let's start over on the RAW side of things. Over the last few weeks since the Great Balls of Fire PPV there have been so many things that have developed and could culminate at SummerSlam. First let us discuss this partial Shield reunion that took place this Monday. First off WWE finally did something right with the back and forth between Rollins and Ambrose with the, I don't trust you and now I don't trust you bit. It was executed to perfection and made the reunion that much better. I think that they will take down Sheasaro and become the Tag Champs and help to stabilize a mediocre tag division on RAW.

Next we have the Big Show and Big Cass match. Well aren't there just one too many guys with the name Big here? After getting the "Good Brothers" to help eliminate the "weapon of mass destruction", if Cass doesn't win this he just needs to leave as it means he will not be main event material for a long time. It will also signify that splitting him and Enzo was one of the worst creative decisions in a while. Also what is with Enzo being suspended above the ring? It's not like he would make that much of a difference if he ran down and tried to interfere, maybe this is punishment for all the backstage heat he has been getting and is truly afraid of heights, who knows.

For the 3rd of 6 RAW matches we have the Women's Champion Alexa Bliss taking of Sasha Banks. Now while it took longer than expected to get to this following Bayley first being announced as the challenger it is better that we got Sasha anyways. 1, she is a better wrestler and has better mic skills than Bayley. 2 She deserves to finally get a true run instead of the back and forth shit that happened with Charlotte last year and 3, honestly, I'm just tired of Bliss as champ. Yes she is the first holder of both belts but she really didn't do anything to deserve them and the title reign on RAW has been too long, it needs to end.

This is probably my second favorite match from RAW and it's for the entrances alone. First we have the Eater of Worlds, Bray Wyatt whose entrance always enthralls everyone with the way that the Universe gets behind him. Then finally have the return of the Demon Balor who has been long forgotten about until the tease a few weeks ago. Once Wyatt upped the stakes this week with his victory over Balor he took it the extra step to cover him in blood after the match, which further signified that the Demon will once again arise at SummerSlam. This match can go either way imo as I don't think a loss could hurt either one.

We have a match that was just recently added and I think it could end up being one of the most intriguing ones of the night, depending on the story involved with it. We have the Miztourage, who have been good, if not great since forming, taking on the team of Jason Jordan and The Hardy's. This match came about after the Miztourage interrupted an interview backstage involving The Hardy's which prompted the Hardy's to come out after Jordan's match when the Miztourage ganged up on him. To me this will help everyone out except for the Miz because he doesn't get to defend his title at SummerSlam. Hopefully this helps to "AWAKEN" the Hardy's some more to complete the character change that was supposed to be coming against the Revival.

Now we have the Main Event of the RAW brand with the Fatal 4-Way for the Universal Championship between Samoa Joe, Roman Reigns, Braun Strowman, and Brock Lesnar. This match has the potential to be one of the most entertaining on the RAW side but it all depends on how much Lesnar is utilized. To me he is the one that hurts this match more than he helps it, even though he is the champ. His skill currently doesn't compare to the other 3 in this match and they need to shine and he needs to start to be phased out. The feud between Roman and Braun, and Roman and Joe have been great in their respective rights but put them three together in a match and it is instant gold. For this match to be successful and for the night to go over as one of the better ones in the more recent history, Brock needs to lose.

Now we have a 205 live match that while they are also on RAW this really is one in itself and is a match for the Cruiserweight Championship. After winning the title on Monday, Tozawa is set to defend his title in a rematch against Neville. This could actually be an entertaining match if both participants are allowed to showcase their true abilities. Even though this match is part of the kickoff I think this will help provide a great start to the show.

And at last we head over to the Smackdown side of things. We have 6 matches on the blue brand and let us start by taking about Orton vs Rusev. While I didn't think there was going to be much to this match when they first announced it, they seemed to build it up a little bit over the last few weeks. Orton and Rusev are both coming off loses at Battleground and I think that Rusev needs this match more than Orton in the fact that they need to keep proving that Rusev is a strong force and should be considered for a singles title.

Lets move onto the Smackdown Tag Team champions, The New Day. New Day just recently re-captured the championships and have had a great feud with the Uso"s and this needs to continue except just bringing in some more teams to the fold. After winning the championships at Battleground the Uso's have seemed to have the upper hand and have attacked the New Day every chance they could and it really seems to be hurting the confidence of The New Day. This match should be one of the best of the series so far but I feel that The New Day needs to keep the titles right now.

For the 3rd match on the Smackdown side we have the Woman's Smackdown Championship match which puts Natalya against the current champion Naomi. Naomi has actually made the woman's division more exciting with her "Feel the Glow" as well as the little change to the belt. I love that they allow certain wrestlers to do things like this because it shows that they listen to wrestlers and show who truly cares. This match should be decent and with Carmella looming around there is the possibility of a MITB cash inâ€¦ not sure if that is going to happen considering the failed attempt by Corbin but i'll discuss that in another match. I feel that we will continue to "Feel the Glow" after this match.

Winner: Naomi (No cash in after by Carmella)

Now let's look at the former Men's MITB case holder, Baron Corbin, matchup vs John Cena. This match was going to be lackluster at best until they added fuel to the fire with John Cena costing Baron the title after he cashed in the MITB briefcase. While I feel that there is a slight chance that Corbin could get the briefcase back tonight during the kickoff show it is very unlikely to happen, even though he has a case to do so. Corbin is going to come out strong and with a vengeance against Cena and it would not surprise me to see him take it to him at the start. We all know that Cena won't go down without a fight but this is the time to help provide another young wrestler a boost and to put him over.

Now we take a look at a battle that has been going on for quite some time, the battle for the United States Championship. The battles between AJ Styles and Kevin Owens really seemed to heat up after Styles beat Owens at a house show at the infamous MSG in NYC. From there on Owens won the title at Battleground but AJ took it back the next night in a triple threat with him, Owens, and Jericho. While this feud has been lackluster and somewhat boring, tonight should be the solution to the feud and allow each wrestler to go the other way for the time being. That being said the reason that will happen is because of the special guest referee, Shane McMahon. The commissioner was put into this role by Daniel Bryan after Owens voiced his displeasure about a ref doing a poor job and needed someone that is fair, impartial and can see what they are doing. This match should be one of the better ones on the card but it wouldn't surprise me, in fact I expect it, for Shane to get involved and help decide the winner to create a feud between him and Owens.

And now we have the main event on the Smackdown side, the WWE Champion Jinder Mahal takes on the king of strong style, Shinsuke Nakamura. While this may not be considered the best match of the night, this should be entertaining to say the least. Nakamura is one of the best performers and after the match with John Cena, he won a championship opportunity and the right to face Mahal here at SummerSlam. Mahal will probably have the Singh brothers at his side and that will make it 3 vs 1 and will make it extremely difficult for him to win the match with them there. I see some way that they are ejected from ringside and make this the 1 vs 1 match it deserves to be. This has the potential to be the best match of the night because of Nakamura alone but Mahal might not make that possible.

Overall based off of my predictions and the overall match setup I will give this PPV a rating of A- before even watching it.