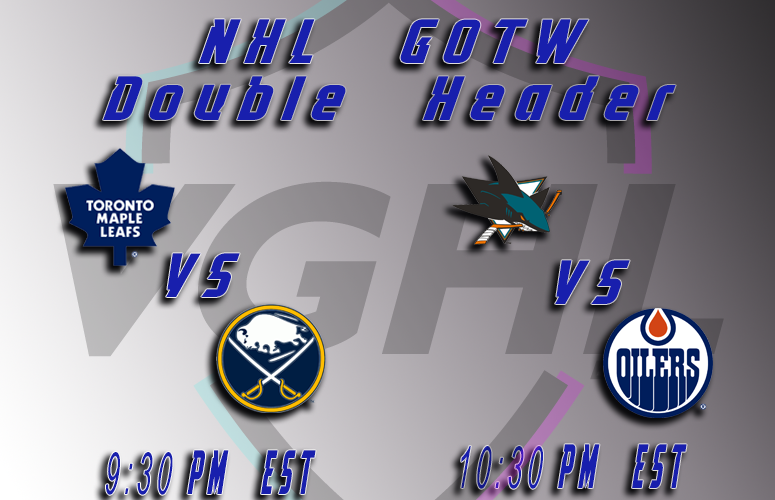 This week's VGNHL game of the week features 4 teams 2 games as we have a double header VG! Yes you read that right, a double header and 3 games all together on this jam packed night of VGHL Hockey that we are bringing to you live with commentary as we have the Leafs VS Sabres and Oilers VS Sharks!!!!!!

Let's take a look at the first matchup of the evening as we have the top team in the league in the Buffalo Sabres taking on the veterean laden Toronto Maple Leafs. These teams have met 3 times so far this season with the Sabres taking 2 of the 3 games by scores of 5-0 and 3-2 respectively but the Leafs would take a game of their own and get some revenge by beating the Sabres 6-3 in the third matchup between the teams!. As we head into Thursday's game the leafs look to even the season series and take back some bragging rights and show the league they aren't a bunch of washed up old bums. Shall we have a look at the numbers between these teams...

As you can see the leafs even though they are in the top 10 in almost every category they are up against arguably the best team in VGNHL as the Sabres sit 1 and 2 in every category! Let's take a look at the key players for each team.

Watch for these teams to go back and forth and battle it out for a tough hard fought victory. As good as the Sabres are, the Leafs are no easy out and are a veteran team that has played years together and will give the Sabres a run for their money!

I will keep this short as i will get right into the Oilers VS Sharks next so i will leave you with some quotes from Leafs owner Rich and Sabres owner Snake!

“Looking forward to it.” While Sabres' owner had a few more words to say in regards to the game..

““Toronto is a solid team.  Most of their roster has been playing together in league & club for some time now.  Should be a good matchup”

There you have it folks Stay tuned this Thursday @ 9:30pm Est to watch these two teams duke it out live on the MVG HUB in the VGNHL Game Center!!!!!

Part 2 of the double header will follow this article.