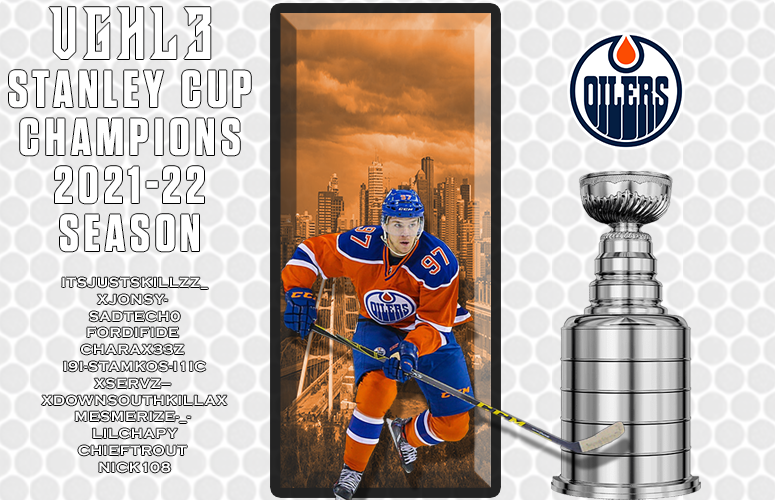 The Champs Are Here

At the start of the season we kicked off the year with a new idea. An idea that would change the landscape of VGHL forever. And might I say, we turned some heads. With a whopping 191 members in the discord as well for the first season. At the beginning of the season, I made a prediction list. Some I was right on some I was not ( Sorry Columbus) ;) Overall, though it may not have been the best season, I believe it was still a successful one. Surpassing the likes of OG, and X6. Not only did we have 16 teams, we kept all 16 until the final week of the regular season!!! If this is any indication of the future I believe that it is bright!!

First off Congratulations to the Edmonton Oilers for winning the first ever VGHL3s Stanley Cup by defeating the Boston Bruins 4-2 in the finale. Congrats go out to everyone on the roster

Now, to make things spicy. Edmonton has gone the distance to win the cup, even with (as some on his team) would describe as an immature douchebag owner who is abusive to his players. Edmonton’s win also begs the question of monitoring trades in the VGHL3s, having a specific admin team to judge a trade to make sure that no team is getting swindled or cheated would be ideal to allow for real management, not for someone who sees a weak owner and takes advantage of them just to get ahead. The trade in question which is marred in controversy would be between the Edmonton Oilers sending x2xApollo4x to Calgary for CHARAx33z. After some digging, I found that the trade was locked for everyone to see, the only one for that matter. Another question is brought up as, without Chara and the blatant swindling of Calgary, do the Oilers make it as far as they did without Chara on the roster? I believe it to not be true, they are still strong without him, can’t discredit that, but they would come nowhere close to the Cup if Chara was not there.

It’s funny too, skillz (their owner) reached out to gloat to me and here is how it went down.

Messiah: I’ve already got 4. Congrats on your first

Skillz: Just a better owner, always will be

Messiah: No. Not really.

Messiah: You built 1, and you did it by fleecing an owner who should not have been an owner to begin with, not much of an accomplishment.

Skillz was unavailable for comment after this. I believe that if Anaheim, or Montreal, or Boston, or Columbus used these underhanded disrespectful tactic, this article would be different and it would be Boston or Anaheim being talked about. There is a fine line between legitimately building a cup winning team, and taking the number 1 overall pick for absolutely nothing.

Let me hear it in the shoutbox, is Edmonton’s cup win forever scarred given the evidence bestowed? Or was it solely the fact that skillz is a good manager despite being abusive to his players, and taking advantage of lesser talented management?

For the final time this season, I bid you all farewell. It has been a pleasure writing for you all these past 8 weeks, and I hope to continue this in the upcoming VG season and next season's VG3s. You all have done a great job of making this a very successful first season, and I hope that everyone can tell their friends about us so that we can have a full 32 team season!!! As always follow me on Twitter @jaredtwilbs for all things vg and sometimes lg. Give @MVGHL a like and follow as well on Twitter, they do everything they can to give you all a safe space for you to do what you love. And lastly, I can't forget about KingLyme. Gift some subs or subscribe to @itskinglyme for everything NHL, he does a great job of providing A1 content for all to enjoy.

Closing Time, one last call for alcohol, so finish your whiskey or beer. Closing Time, you don’t have to go home, but you can’t stay here.