The Bear's journey to the Calder Cup 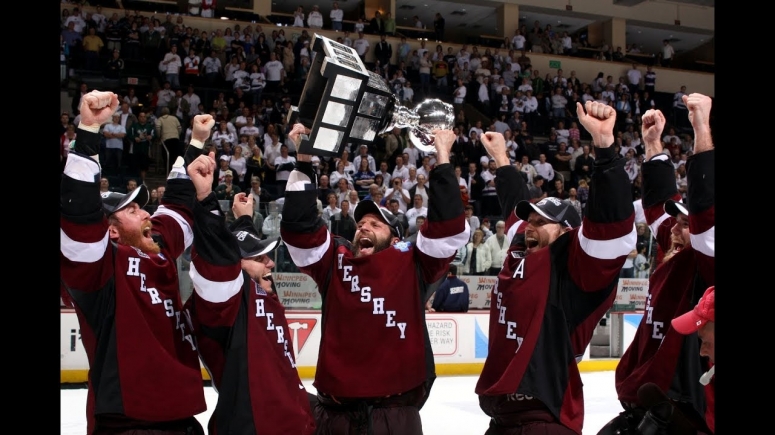 My assistant (ItsYoungBoog) and I came to the VGHL and decided to take an AHL team together because we originally were going to take one in LG but we both got Cap banned so we both decided to come over to VG and take management positions for the Hershey Bears. I was gladly given this opportunity by Shaynesta and Popeskill from the Washington Capitals organization so I obviously  took the Bears because they’re the affiliate of my favourite NHL team.

My main focus coming into the season was to do well in the draft and bidding so that I could build my team right away off the bat. Come draft day, my NHL team said they had the 7th overall pick and that I was allowed to use it since they had no interest in anyone. I used that 7th overall pick on C_Martzy02 who was on my PHL team last season on Niagara which I thought was the best available player at #7.

When bidding day arrived, I had no clue how I was going to do, so I decided to do some research on some of the free agents on the list. I noticed that a lot of players that I knew from LG were available and so I went for most of them right away but I was only able to win bids on key players that produced for me this season like Blades,TK and Chemtrailss. We started off hot right away once the season started and we were firing on all cylinders offensively blowing out most teams every game, averaging at least 5+ goals a game. Our biggest weakness early on in the season was our defense so I kept making moves for defenseman via trades and free agency but I wasn’t able to find that right defenseman to put us over the top.

I was finally able to solve my problems when I picked up DCLight, Podkolzin and Pelly. All 3 of them were natural forwards too but they were solid all season and filled in nicely on our D-Core. Near the halfway point of the season these Bears were still dominating the AHL at the top of the standings while our NHL team was at the bottom. Naturally the NHL team decided to call up our best player in Blades and nobody was happy about that decision about it, including Blades, so they only kept him up their for a week because we all agreed on it. They ended up giving him back to us to continue our run at the Calder Cup.

By the time the regular season ended, we finished 1st in our division, 1st in the EAST and 2nd in the entire league, 1 point away from the Presidents Trophy to the Utica Comets who forfeited us twice this season because they were so scared of us. We ended up making a couple of moves by acquiring Snipeshotty and CT83– and added forward depth with MikehtheGod and Crashman67. This strengthened our squad all around at each position, giving us depth to make a deep playoff run. We also had 3 100+ point Scorers on the season with the dynamic trio of Boog Blades and Martzy.

In Round 1, we faced off against the wild card 2 seed, the Bridgeport Sound Tigers. They were solid a team on paper with good depth pieces like Jojodevil,Perfetti,TJD and a solid management duo in Icedfire and Brady.  We were able to beat the Sound Tigers in 5 games but the entire series was very close with at least 2 to 3 of the 5 games being 1 goal games.

Next, we ended up matching up with the Charlotte Checkers in Round 2  who were in the same division as us and probably would’ve been our toughest series of the entire playoffs with key players like Frostylocks MT98 Grammyhands Tommyboi. This series was unexpected and we won in 5 games, knocking out their starting goalie Capban_Clark1999 after I embarrassed him in game 1 and he benched him self the entire series after that. Overall, this series was a huge surprise to me because it looked like it would be a 7 game series but our highly powered offence prevailed against their very defensive minded team.

As we advanced to the Eastern Conference finals, we matched up with the Rochester Americans who also ended up making a couple moves before the playoffs to get Godsjesus, GhostbearTTV and Kroeger71. Their NHL team also sent down Ransom613 to help them and they knocked out the Laval Rockets and the Syracuse Crunch, both of which were power house teams all season. This series got chippy and toxic right away as we won game 1 but lost game 2 after a 3rd period collapse. An OT loss had our entire team RATTLED so I made the decision to put myself into the series after benching myself for the first 2 rounds to move Blades to his natural RW position. We ended up winning game 3 but there was confusion after the game as CT83 was supposedly suspended before the game which I never knew about. The game was overturned and we were down 2-1 in series going into game 4 that night. Since it was game 4 and we needed 10 players to play in the first 4 games, we needed to use 1 more player since we had no one else to use so we went with Crashman along side me and Boog. We were down early in the game with 2-0 and 3-1 deficits but then Crash EXPLODED with a 4 goal game. Crash and Boog were using their Sask chemistry to lead us to a 6-4 win to make it a 2-2 series tie. Meanwhile, Rochester yet AGAIN reported our players for doing the fight glitch and the league handed out blades a 4 game suspension and TK a 2 game suspension. They both appealed and were able to play game 5. In game 5, we were able to win by a score of 5-2 to make it a 3-2 series lead and making it 1 win away from a Calder cup finals berth. Once again, TK didn’t learn from his past mistakes and did the fight glitch. He was not lucky this time around and lost his appeal costing him 6 game suspension. Blades also lost his appeal resulting in a 4 game suspension meaning we would lose them both for remainder of this series and a bit for the finals.

Game 6 didn’t go to well for the Bears and Rochester came out to play considering their season was on the line. They were able to force a Game 7 with by winning game 6 with a final score of 4-2. In game 7, the biggest game you’ll ever get to play in any league, there were clearly nerves leading up to the game and during the game. If you make a mistake your season could potentially end. This game became a neutral zone trap game and both teams were held scoreless entering the 3rd period. I was able to jam in the go ahead goal in front of a rebound from crash to make the game 1-0 with 8 mins left. The game was still scoreless coming down to the final minutes and their RW suddenly lagged out with 2 mins to go. Rochester was pressing to tie the game up and then their CPU kept the puck alive in the zone and sent it to Ransom who found Kroeger open for a one timer that went in off of Snipeshotty’s blocker to tie the game 1-1 heading to OT in this Stressful Game 7. Rochester had to take a penalty because of the lag out by their RW to start off the OT it didn’t take very long for this OT to end because of this exact play.....

Boog Cuts to the middle with the puck, hands it off to CT. On reset he enters the zone, hits Boog in an open lane. Boog waits for the open passing lane. He sends it cross crease to me and I bury the Cold blooded Dagger In OT to send these BEARS To the Calder Cup finals and end Rochester’s season in a crazy Game 7 OT game.

In the Calder Cup Finals we played the surprising Tucson Roadrunners who knocked out the Icehogs in 6 games containing a team with Nickx98,goostav,krazytry and Coachx19. Since blades and TK were suspended for the start of this series, we needed our depth players to clutch up these important games if we were gonna be able to finish this season off. I ended up playing with 4 different wingers for these 2 game’s in which we won both by a score of 5-0 and 4-2 respectively. Playing with Boog, Mikeh, Crash and Martzy paid off defiantly and we were able to take a comfortable 2-0 series lead. In Game 3 we had Blades return to the lineup after a 4 games suspension from last series but the Roadrunners took advantage right away off of a 5 min powerplay to take a 2-1 lead, ultimately winning game 3 with a final score of 3-2 . In game 4 Tucson was up 1-0 until the 20 second mark in the 2nd when I sent a pass in front to Boog to tie the game up at 1-1. That's when the floodgates opened. With 3 straight goals in the 3rd from Boog and 2 from Blades, we were able to win the game and take a 3-1 series lead putting the Roadrunners on the brink of elimination.

For game 5 I ended up putting back the dynamic trio I’ve been using all season in Boog, Blades and Martzy. I was not available to play and we had TK back in the lineup which was a major boost coming into the Calder clinching game. The Roadrunners ended up rescheduling the 9pm to 10pm but once the game got going the Bears got up to a quick 2-0 lead by goals from Martzy and Blades after 1 period. Tucson was facing elimination without BoilyHP who may have been benched because of locker room issues. After 2 periods the Bears were up 3-1 and were all over the Roadrunners. The end was near and the Bears ended up winning the final game 4-2 to the Clinch the Calder Cup in 5 Games. Kudos to the Roadrunners. They had a unbelievable season after their captain quit during the 2nd week and Hamanator and Chris took over and made some great acquisitions in Boily and Killerz to get them to the playoffs. They were able to knock out 3 very good teams in the Comets, Gulls, and Ice Hogs. That’s what you call a turn around of a season.

I wouldn’t have been able to pull this season off without the teammates and players that I brought in all season long. Everyone was producing like a championship team should and it was a very fun season to be apart of.

MikehTheGod
This comment was minimized by the moderator on the site

DCLightt
This comment was minimized by the moderator on the site

Avalanche_city
This comment was minimized by the moderator on the site

Avalanche_city
There are no comments posted here yet