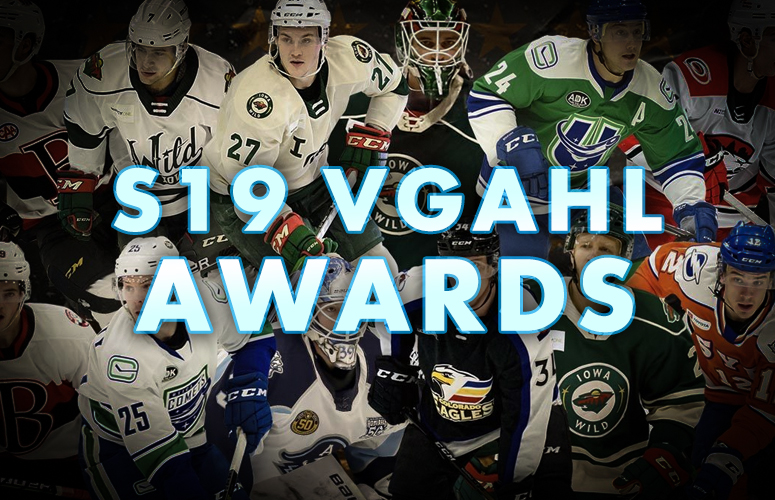 Man, I gotta remember how to post on this website. I’m sure it’s like riding a bike: one time I fell and got messed up pretty bad and never wanted to do it again. I remember the first time I tried to post to this website, I forgot to include a proper graphic and just used a stretched version of the VGAHL logo. It looked like complete shit and I’m glad Castro was able to rectify my mistake.

I’m also unsure as to why it took two months (maybe three? Life in quarantine just seems like a blur now as I enter month five of this) to vote on these awards. You think this is something that would be voted on almost instantly. Evidently not.

“Just when I thought I was out, they pull me back in!” As I covered the B-league (ironically called the AHL) of the VGHL all season long, hyping up players and ruining reputations, I was asked to come back and vote on some of the awards for this past season of the VGAHL. After completing this task, I was asked to compile an article recapping the awards and providing some sort of justification as to why said players won these awards.

This following article is a celebration of the success that some members of the league achieved over the grueling three months of the nineteenth season of the VGAHL. Between the sixty regular season games and the 16 required victories to win the Calder Cup, an elite selection of players were able to live up to the high standards that the namesake of these awards have set. It is no easy feat to be selected as the recipient of one of these awards, and I congratulate all those who were victorious in doing so.

This isn’t just my opinion on these awards: we had a committee of experts and various members of the VGHL that I was honoured to be a part of (even though I have no idea who else voted, I just know that my vote kind of counted for something). If you’re upset about who won the awards, grab a box of tissues and put on a sad movie or look in a mirror or something. I don’t care. Think of me as the Ricky Gervais of this awards committee except more handsome and less funny/rich.

Let’s get to the awards! We’ll start with the automatically determined ones.

CALDER CUP (CHAMPIONS OF THE AHL)

The Hershey Bears finished the season atop the Eastern Conference, going 47-9-3 and finishing one point back of the Macgregor Kilpatrick Trophy winners (we’ll get to them later). Their dominance continued into the playoffs, as they disposed of the Bridgeport Sound Tigers, the Charlotte Checkers, and the Rochester Americans on their way to the Calder Cup finals. Upon arrival, they were able to dispose of the Tucson Roadrunners and claim the Calder Cup as the VGAHL champions of season 19.

Utica was at the top of the standings all season long, as cpenn took the reins and didn’t want any interference in the construction of his team. It was for the best, as the Comets were able to shut teams down (allowing the second fewest goals against in the league with 143) and counterattack efficiently and effectively. This team was as consistent as you could ask for, as they scored 49 points on the road and 49 at home. While they weren’t as successful in the playoffs, nobody can doubt the regular season performance of the Utica Comets.

We previously mentioned their road to the Calder Cup, and we got a little carried away and basically listed off all of their opponents on their way to the ‘ship. So, let’s talk a bit about their roster: CapsFan and YoungBoog assembled a championship caliber team the was offensively championed by Blades, Martzy, CrashMan, and Mikeh, while supported defensively by ct83, DCLight, TKJOSI, Pelly, and Podkolzin. Kotic (snipeshotty) and chemtrails were studs in net for the Bears, as Hershey’s all-star roster decimated teams in the playoffs and won the Calder Cup.

The Tucson Roadrunners were the Cinderella story of these playoffs, for sure. They just squeaked into the playoffs, and were able to defeat the Utica Comets in the first round in a massive upset. Continuing the trend, they defeated the San Diego Gulls in the second round, and ended another strong playoff run by the Rockford Ice Hogs in the conference finals to proceed to the Calder Cup finals. Chr1s and Hamanator brought the Quebec to the Desert as players like Boily, Skillz, Killerz, and Angrod all made key contributions to their playoff campaign, while Dominator was a beast in net in an effort that ultimately came up short.

You’re going to be seeing his name a few times in this article. Blades-l59l had a fantastic season in Hershey and did so on a bargain deal; he only cost them $3.5M in cap. He scored 118 goals in 35 games, averaging just over a hat-trick per game. He also did this while shooting 44.7% of his 264 shots, showcasing his efficiency and his knack for finding the back of the net. He added 24 goals in the playoffs, capping off an incredible season 19.

Welcome back to the Blades-l59l show. My next guest is the regular season leading point scorer, scoring 205 points in 35 games, good for an average of 5.86 points per game. He finished +124, probably because he made magic happen every time he stepped foot on the ice. Coming all the way from Hershey, Pennsylvania, Blades was a force to be reckoned with this past season, and struck fear into any goalie he came across.

Goaltending for the Checkers was a revolving door all season, even though their defense was akin to an impenetrable fortress. When the dust settled, cbdpine put in the most time for the Checkers between the pipes this past season, playing 29 games for Charlotte and allowing 80 goals against. While his numbers weren’t the greatest (2.72 GAA, 0.763 SV%, 1 SO), his record was far above average (20-8-1) and his consistency was a great asset to a team that put their back end first.

Now, for the ones we all voted on! Get ready to fight!

What else is left to say? Blades had an incredible season, putting up nearly 6 points per game and beating the second place leading scorer by 20 points. He also beat the second place leading goal scorer by 17 goals. He had a 31-3-1 record all season, and was a force to be reckoned with in the faceoff dot as he won 57.6% of his draws. Blades was consistently at the top of the league all season long, and adds another achievement to his season 19 resume.

Big League Ciu! Ciulla found himself in Laval this past season and while his sample size was limited to 26 games, his numbers were among some of the best goaltenders in the league. He possessed a record of 18-6-2 with a GAA of 2.87 (5th in the league for goalies with more than 25 GP) and a SV% of .828, which paced the league for goalies with more than 25 games played. With a shutout to his name, Ciulla’s consistent and quality performances this season earned him the title of the league’s best goaltender.

WINNER: Killswitch1980. I’ll be biased: I love this guy. Good dude, Always Sunny fan, and just puts people in caskets on the ice. All jokes aside, Killswitch had a great season as one of the leaders of the Syracuse Crunch. He played in all but 11 games for the Crunch, with his 49 GP being second in the league. In those 49 games, he only contributed 5 goals, but paced defenders with 60 assists and 65 points. I mentioned the hits earlier, and he ran roughshod on players this season with 294 of them. Excelling at both ends of the ice as a defender is difficult, and Switch did nothing short of that this season. He is the Golden God, after all.

I have to find more to write about this guy? For real? Cool. In another league, Dan (he was formerly known as BladeMan-Dan and I will always call him that) carried us to a Calder Cup. We didn’t play too much together, but his performance always left me in awe. The guy went undefeated in the playoffs and was a key factor as to why we won the cup. Not only that, but the guy is as sweet as sugar of the ice. We can all get a little toxic from time to time, but Dan is a good man, and is proving how good of a player he is in a new home. Cheers!

Capsfan has a wealth of experience across multiple leagues, including some management experience, and brought that knowledge to the table in this VG season. From the onset, the Bears had a stacked team that just managed to get better throughout the season. Hershey made some clutch pickups as the season progressed and while they were a contender from the first week, they became an undeniable favourite heading into playoffs. We spoke of their regular season dominance and we know of their playoff success, so all that’s left to do is congratulate Capitalsfan_08 on his management skills over the past 4 months.

Thomas! Tommy is another really good dude who’s also a great player, and he proved it this season. He played whatever was needed whenever he was needed this past season, leading his Checkers by example. Tommy played 19 games as a forward (averaging 3.47 points per game and only had 4 PIM), 25 games at defense (scoring 22 points and was a +74), and even played a game in net (he got shelled with 10 goals against). If you’re looking for a dedicated player, TBizzle is your man and a deserving recipient of this honour.

WINNER: ItsYoungBoog. Called it! I said it at the end of the playoffs, and clearly I know what I’m talking about, as YoungBoog was declared the MVP of the Calder Cup winning Hershey Bears. Boog played in 21 of the Bears’ 22 playoff games, and led the team in assists with 29 and points with 49 (his 20 goals were second to Blades’ 24 (wait Blades didn’t win an award he was eligible for??)). Boog was clutch throughout his playoff run, as 20% of his goals were game winners, and is a very good choice as Hershey’s most valuable player in these playoffs. That’s it, I’m done! For real this time! Thank goodness it’s over!

What a competitive season we witnessed in season 19, and the accomplishments of the aforementioned players should be held in high regard given the quality of talent that played in the VGAHL this past season. It was an exciting season for sure, and I encourage people to return to it once the new season commences. In the meantime, enjoy the rest of your summer, good luck in the KHL, and get ready for the weird-ass empty arena NHL games!

Capitalsfan_08
This comment was minimized by the moderator on the site

Capitalsfan_08
There are no comments posted here yet