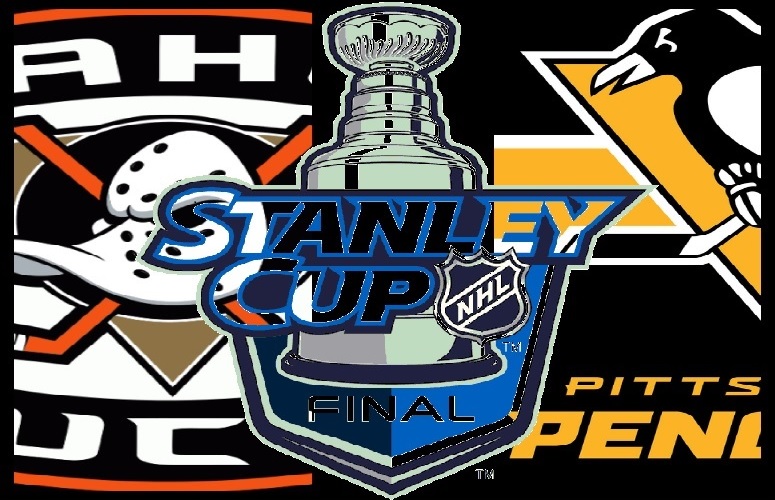 We have come to that point in the season that matters the most, the Stanley Cup Finals. This season we have the President’s trophy and Eastern Conference winner, The Pittsburgh Penguins, facing off against the 1st overall seed in the Western Conference, the Anaheim Ducks.

During the playoff’s things have gone as you have expected with the Penguins supporting a 12-2-0 record while the Ducks have gone 12-3-1. This series will put the top 2 teams from each conference against each other and should be a great battle.

Let’s start with the Pittsburgh Penguins. During the playoffs they opened up the Wild Card round with a matchup against the 2nd wildcard, the New Jersey Devils. This series was over rather quickly as the Pens swept the Devils outscoring them 19-11. While the series was a sweep, the opening 2 games were close ones with Pens winning 1-0 and then 6-5 in OT. The next two games were won by the same score of 6-3 putting he Devils out of their misery. Next the Pens move on to face the Islanders who just came off a 4-1 series win over the Hurricanes. During this series the Pens won 5-1 outscoring the Islanders 16-9. The Isles took game 2 6-4 and were heading back home tied but ending up losing game 3 1-0 and then game 4, 3-2 in OT. This sent the series back to Pittsburgh with the Isles down 3-1 and from there the series was over rather quickly in game 5 as the Pens shut out the Islanders 4-0. The Conference Finals put the Pens up against the surging Red Wings who just beat the Buffalo Sabres, who were challenging Pitt for the Presidents Trophy, 4-1. This series started with the Red Wings coming out on fire taking game 1, 8-4. After that though it was all Pittsburgh as they came back to take next 4 games to win the series 4-1. Every game in this series outside of game 1 was decided by 1 goal and was a hard fought series despite the final result.

Now we move on to the Anaheim Ducks. The Ducks started out in the Wild Card round against one of the hottest teams heading into the playoffs, the Edmonton Oilers. This series was over in 5 games and the Ducks outscored the Oilers 27-18. Game 1 the Ducks came out and dominated the Oilers winning 11-2, only won game 2 by the score of 3-2 and then lost game 3 7-0 giving the Oilers hope. Then during game 4 they won 5-1 and closed out the series with an 8-6 win back at the Honda Center. Next series the Ducks skated against the Arizona Coyotes and flew past them 4-1. The Yotes just came off a series in which they swept the Kings and were hoping to ride that momentum. Game 1 was a close affair where they won 5-4 in OT and then dominated game 2 7-2. Game 3 the Yotes came back in tremendous fashion and won 8-1 to bring the series back to 2-1. Games 4 and 5 we won by the Ducks by a 2-goal margin in each game. Once they got past the Yotes they moved on to face the Colorado Avalanche who put away the Predators during the previous round in 6. This round would prove to be their toughest challenge so far as it took them 6 games to move past the Avs and gain that elusive berth to the Stanley Cup finals. This series started off with the Ducks sweeping both games at home by a combined score of 13-2 and were flying high heading to the mile-high city of Denver. The Avs came back strong game 3 and won 6-3 to bring the series to 2-1 and then proceeded to finish off their own sweep with a 6-5 OT win sending the series back to Anaheim tied 2-2. Anaheim won the next game at home 4-3 in OT and then went to Denver and won 3-0 to finish out the series.

Now we come down to the final series to determine who will skate off the ice holding the most coveted trophy in all of professional sports, the Stanley Cup. The Pittsburgh Penguins are looking to go back to back for the first time in VG since s13-s14. The Anaheim Ducks are looking to be the only the second team from the Western Conference to hoist the trophy in the last 8 seasons. This should be a hard fought battle and should go the distance.