The Ducks Journey to The Stanley Cup 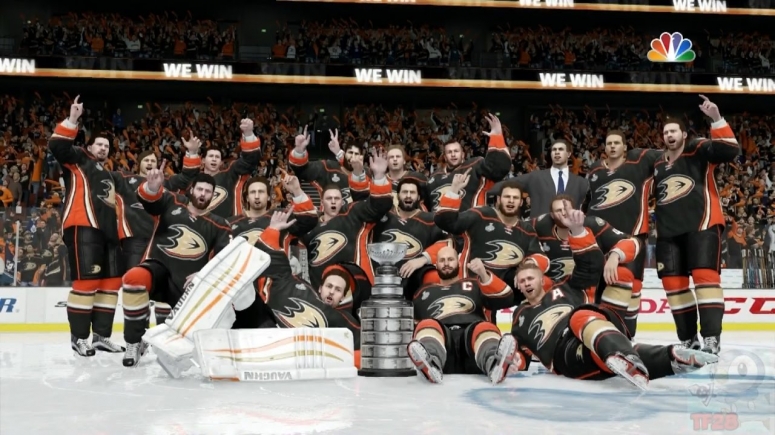 Regular season went pretty much how NeilerR and I planned it from the start. We had a plan for bidding and were able to execute it pretty well. We grabbed Chyz and Brad for 6 million each, we were shocked people stopped bidding on Brad at that price but we were happy with it. Then we filled out our roster with other role players that played a big role in winning the cup like johnnyrocco613 and patrickisonfire. Then we used our AHL like other teams in the league to secure Lehk at 3.5 million and Nav at 1.5 million. These two I was shocked to get for so cheap as well and teams stopped bidding at those prices. Having all of these guys on the same team we knew there was going to be ups and downs.

It's hard to keep some many headcases in check, but we were up for the task. The biggest obstacle we had was to keep everyone interested for the whole season. We knew the whole time what the final outcome would be, but was it worth it? We had some impactful moves along the way like grabbing darknight330 from Minnesota. His veteran playoff experience was something that interested us in the trade market. We also struggled with goalies all regular season, which teams thought was a playoff issue not knowing we had Lehk and NielerR ready to tend the net for playoffs when the call came. We started off with xPoehling and CremeBrulee but they seemed to want to play dodgeball with the puck so we needed to move on from them. We then got Somekindofhate who was one of the worst goalies I've ever seen but we needed to have a cheap contract to have the roster we had.

The biggest move was having biebsinthecrap61 quit so we can free up cap to secure the best alcoholic on VGHL, ExcessiveForeskn. Just a locker room presence needed to have a winning environment. With our roster going into the playoffs we knew no team could keep up with us in the end.

The ducks rolled into the playoffs with high hopes, considering the roster Riv built. Their first opponent was also on a hot streak, the Edmonton Oilers. The series started with A-Ali putting the ducks on west host, which backfired immediately considering the ducks had Nav and Brad both well known west players. The Oilers were no match for the Ducks being lead by a braindead owner so the series didn’t last very long as the Ducks eliminated the Oilers in a quick five games.

The second round was the toughest opponent for the ducks, according to their management and players. The Coyotes played a strong game and trapped well, which had the ducks frustrated throughout the series. Usual point-getters nav/nieler/riv did not have the success they had in round 1 due to the Coyotes stingy defence; however, the series MVP in this series goes to the solid defence and goaltending the ducks were provided by multiple individuals including Brad, Nieler, Riv, Alex, Lehk.

The third round was the second toughest matchup for the ducks. The Colorado Avalanche were coming in riding high off their rulebook wins, but the conference finals would be the furthest they would go. It would be very apparent early on that Sabres1414 play could not back up his mouth when it came down to defending Nav. Nav and Nieler had great success against this D core, and the ducks D core highlighted around Brad and Riv did a great job shutting down the second tier Avalanche forwards.

Series MVP: NAV (kind of sabres if you factor in how awful he was at containing Nav)

Finally, the matchup that everyone predicted months ago would take place. The Anaheim Ducks vs Pittsburgh Penguins, the series started with a bit of misfortune for the ducks. Their eventual series MVP Lehk would not be able to play games 1 or 2 because of a PSN account verification issue, oddly enough, the player in charge of these verifications played for the Pittsburgh Penguins. The penguins took a quick 2-0 series lead, which resulted in constant trash-talking between penguins owner Reli and the Ducks. Reli believed a single player on the ducks would not be able to crack his roster at this point.

The series turned around dramatically when LEHK returned to his net, which allowed Nieler and Nav to destroy the penguins D core and Reli. Reli and the rest of the penguins forwards were shut down entirely by Brad and Riv and had no answer for the duck's skill. Penguins did have chances but LEHK showed he’s built for the finals and carried his team to four straight wins. The ducks would clinch the Stanley Cup in 6 games and Reli left the discord faster than you could say QUACK.

xNav
This comment was minimized by the moderator on the site

LEHKONENN
This comment was minimized by the moderator on the site

LEHKONENN
There are no comments posted here yet