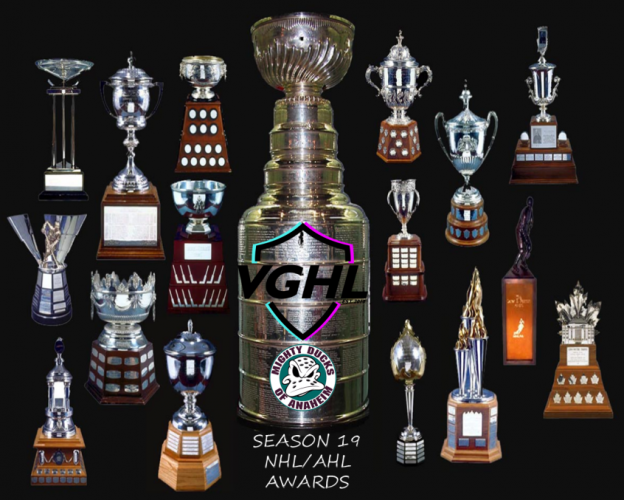 The Anaheim Ducks took home the ultimate prize of the Stanley Cup last VGHL season, so congratulations to Riv, Cage and the rest of the team on the win. With that out of the way, here are your individual award winners for season 19 of VGHL.

GM of the Year: Saucenikov

Detroit owner Saucenikov started the season on the wrong foot, having to buy out his captain and basically needing to remake  the team on the fly. He did a hell of a job, getting Deathclown to be his new captain and those two made a strong push in the playoffs, ultimately falling to the defending champs, Pittsburgh Penguins in the ECF. Congratulations Saucenikov on GM of the Year.

One of the great leaders for all of VGHL, Stat yet again exemplified what it meant to be a leader and to play every game with class and respect. One of the greatest members in the NHL community on and off the ice, congrats to Stat on this award.

Awarded to the person who exemplifies perseverance and sportsmanship, redconcept demonstrated these actions throughout the entire season. Leading the Carolina Hurricanes to a tremendous season, redconcept showed up to every game he played, tried his butt off and ended the game with class no matter the outcome. Congrats to redconcept.

Awarded to the player who applies the core values of hockey-commitment, perseverance and teamwork, Koz did that not only with his team but he did it in the community as well. He always did what was best for his Buffalo Sabres team and never for himself, he helped Buffalo to the playoffs and they were in the race for the Presidents trophy the entire season. Koz does everything he can for the community whether it’s for his team, on the ice or just media in general, congrats to Koz.

There is no better leader for VGHL than the current NHL commissioner dophares. Whether it’s someone asking a question or a manager in need of help, Doug does his best and does an amazing job at it. There is no better leader for the VGNHL community and I for one am glad that he has been at the forefront for the VGNHL for many seasons now. Congrats Doug.

One of the best, if not the absolute best two way center in the game, it is no surprise to me at all that Akon was able to bring home the Selke in season 19. With 335 hits, a 56.6% faceoff percentage and a 33 win season in just 46 games, Akon did everything in his power to help Buffalo have an amazing season and also earned the Selke for his troubles. Congrats Akon on a well earned Selke.

Lady Byng is awarded to a player that best exemplifies sportsmanship, gentlemanly conduct and still playing at a high level. And Akon takes home another individual award for his efforts. While already proving that he is just a beast in the defensive zone, he added 83 goals and 108 assists in 46 games, good enough for 191 points. While still dominating everyone on the ice, Akon still shows everyone the utmost respect night in and night out and I commend him for that. Congrats to Akon again.

For someone who got moved so much, I would have never thought he would win the Calder. But here we are. J_sherminator, who ended up playing for 4 teams this season, wins rookie of the year. With 40 goals and 32 assists this season for 4 teams, Sherm did amazing. And if you consider the fact that Sherm did not play more than 10 regular season games for any single team, developing chemistry was even harder. Sherm still powered through and was able to win the Calder, so congrats to Sherm.

He stole Stat’s Norris. All jokes aside, Kyle had a tremendous season, finally winning the Norris for the second time in his career. In 31 games this season, Kyle had 19 goals and 36 assists on defence and added a +110 as well. Hands down Kyle was just the best defenseman this season, and whether or not this is going to be a regular occurrence for Kyle, we will find out. Owner Kylo_Reli sure hopes so as this would give him a full Norris line on defence.

Yet another Penguin takes home another award. Besmith’s first season in Pittsburgh after being traded here was a tremendous success. Besmith was the best goaltender in season 19 of VGHL by far and there’s honestly not much debate about it. Going 24-6 with a 1.63 goals against average and 0.841 save percentage, his first year in the NHL probably couldn’t have gone any better. Besmith will be a goaltender to watch in the next coming season and I am interested to see if this is a regular occurrence. In my opinion, I think it will be. Congrats to Besmith.

Kylo_Reli is the MVP for season 19 of VGHL and it was a well earned MVP award. In 56 games last season, Kylo_Reli scored 75 goals and had 92 assists to add along to his goals. WIth 167 points in the regular season, his +159 and 45 wins, there was no doubt in my mind that Reli was going to win MVP. If Pittsburgh doesn’t have Reli, they don’t win the Presidents Trophy. Reli is a vital part to not only their offence, but their defence as well. Reli did it all for the Penguins and congratulations to him.

Lehk wins the Conn Smyth after a dominant performance in the Stanley Cup finals. The series between Anaheim and Pittsburgh ended up going to 6 games, but Anaheim did not lose a single game Lehk was in net for. Lehk only allowed 5 goals in 4 games, going 4-0 in the finals and a .900 save percentage. Lehk turned the series around the second he started playing. Until Lehk played, the series was 2-0 for the Penguins, then Lehk turned the entire series around and became an impossible puzzle for the Penguins to solve. Congratulations to Lehk on the Conn Smyth and the Stanley Cup.

Chicken_Napkin
This comment was minimized by the moderator on the site

toslick
This comment was minimized by the moderator on the site

Saucenikov
This comment was minimized by the moderator on the site

Congrats to all the winners. Thank you DeathClown for stepping up for me this season. Was much appreciated!

Special shoutout to Hitpack. Right before playoffs he had to unfortunately leave the team due to medical/personal reasons which...

Congrats to all the winners. Thank you DeathClown for stepping up for me this season. Was much appreciated!

Special shoutout to Hitpack. Right before playoffs he had to unfortunately leave the team due to medical/personal reasons which resulted in a black list (maybe Castro can lower the punishment). If you didn’t do what you did, Detroit never would have had the opportunity to compete in the loffs to begin with. Thank you for being a great team player. If you are still looking to continue to play VG one day, please know that I am keeping my word when buying back your BL if need be. Message me on discord if and when the time comes.

Hope you are doing better and staying healthy as you can!

Hitpack
This comment was minimized by the moderator on the site

Congrats Saucenikov, you totally deserve it, really liked being part of your team this season. Congrats to all the other winners as well.

dophares2000
This comment was minimized by the moderator on the site

Good article and congrats to all the winners!!!

Kylo_Reli
This comment was minimized by the moderator on the site

Hey Atleast they aknowledged your award in here Reli 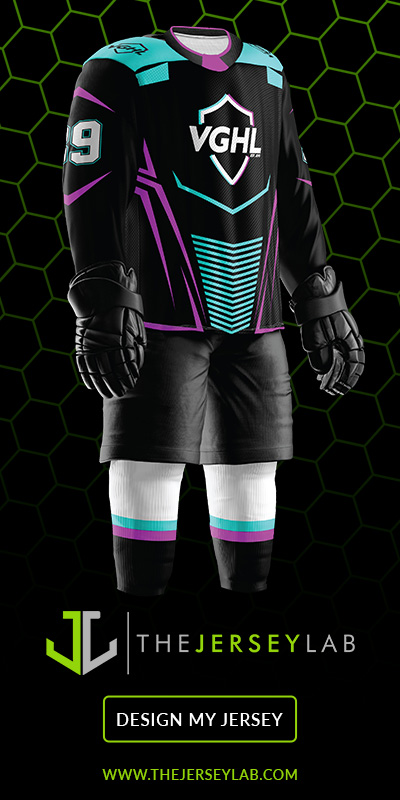