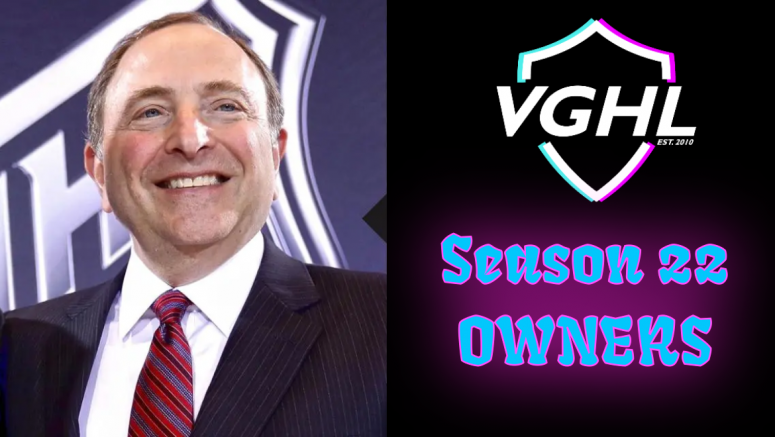 I want to welcome everyone back for another fun-filled season of NHL in VG. While we have moved the timeline back a little but, I didn't feel that it was necessary to wait any longer on the announcement of the upcoming owners. This season we have 21 returning owners from last year and 7 new ones for this season. We are sticking with the amount of teams that we had during season 20 due to EA not having cross play and splitting the community between PS4 and PS5.

Without further ado, I want to bring to you the Season 22 NHL Owners

ANEUSERSHEEP is moving over from Vancouver where he narrowly missed the playoffs last season by 3 points. Even though he was close it was still disappointing to not be one of the final 16 teams. He is hoping that a change of scenery will do him good.

PNC is our longest tenured owner at 12 seasons and has decided that he is taking his talents from one side of the desert to the other. Having relocated from Vegas to Glendale, he's hoping to get back to his winning ways and reach the playoffs once again.

After having a rough 1st season as NHL owner Shady is switching divisions going from the Metro to the Atlantic. With many teams shifting this season, time will tell if this was the right move.

Andrew is coming off a rough season last year having only amassed a total of 10 years. He is shifting from the outskirts on the Island to the eye of a Hurricane in hopes that these winds will take him higher in the standings.

This is Messiah's first run at ownership at the NHL after having previously been a captain at the AHL level and an owner at the PHL. Last season he led his team to a playoff run, could the same be said in the NHL? We will have to wait and see.

CapitalsFan_08 is coming off a strong year in San Jose having won the Pacific Division and riding that wave into the Conference finals. He will take his talents from San Jose to become a snow-bunny in the cold mountains of Denver and maybe, just maybe, take the Avalanche to new heights.

Well… another year has come and gone, and Castro is still in Dallas. With the follow up to his Conference Finals appearance, Castro's team shit the bed and he found himself as the 3rd worst team in the West. Do you think this could be a chance to turn it around or will he suffer the same fate? Tune in to find out

SJackson is coming back for his 4th consecutive season owning but his 8th overall and I wonder if he is ever going to be able to taste the playoffs again. He was close last season just missing the playoffs by 5 points, but will this be his first playoff appearance since Season 17?

This is jewofcanada's 2nd season of ownership and while his first was a bit turbulent, he is hoping that the pieces he has coming back from last season are going to kickstart his team into free agency. Will we see the Oilers rise again or will it just be a slip and slide on the ice? Or will we see jewofcanada regain some of the former glory that he saw as a captain early in his career?

Peace is coming back for a 2nd go around at being an NHL owner here in VG. His first season was faced with a bunch of ups and downs and he looks to have stabilized himself heading into a second season. If he can keep his eye on the prize, I can see him in the playoffs this upcoming season.

Little is recently new to VG and during his first campaign he led the Colorado Eagles in the AHL to the Calder Cup Finals in which he lost to Hershey 4-2. He realized that while he was not able to secure the top prize he wanted to be challenged more and has accepted the ownership of the Kings. Good luck this season, you're going to need it.

Another new owner this year, iZinczyi is taking the leap from NHL captaincy to ownership by accepting the position to lead the Wild. He has spent the last 3 seasons in the NHL, 2 as a player and 1 as captain and has some decent success. I, for one, am curious to see how he will do as owner… how about yourself, what do you think?

Binny is coming back for a 2nd season after having a very successful rookie year. He led the Flames to a 2nd place finish in the Pacific and made it to the 2nd round of the playoffs. Apparently, he felt that the West was too east as he decided to switch to another Canadian team but this time in the East, Montreal. Will he be able to repeat what he did last year but this time in the East?

Finally, Pepsi has come back to… Ownership. Pepsi was a former NHL owner of the Florida Panthers back in season 17. He has decided to come back to the NHL after taking a few seasons off and then running the Cuda last year and bringing them to the playoffs. Hopefully this time in the NHL will be better than the last.

Snake is making another return this year but this time he is in a place that he has never been before. Snake has taken his talents from upstate NY and has moved into the Metropolitan area and is looking to being the Devils back to former glory. I'm expecting nothing less than the 2nd round of the playoffs for Snake and if he does anything less than that, the season could be considered a failure.

Shadow another new owner making the jump from captaincy to owner. Last season he was the captain for the NYR and while the year was not as successful as he wanted it to be, he was able to gain some knowledge about VG from Scalz and hopes to be able to do better than his mentor this year. Will he succeed and take the Islanders out of the basement of the Metro? At this moment, it's too soon to tell.

Scalz is coming back for his 4th consecutive season as owner and his 3rd as a NY Ranger. He contemplated moving out of the Metro, but his heart just couldn't let him move just yet. The last two years in NY have not been that great and he is looking to make it back to the playoffs. Hopefully this year will be better than the last.

Kaxo is coming back for his 4th season as owner of the Sens. Last season he was able to make the playoffs although they were unable to get out of the first round after suffering a loss to Buffalo. While it is disappointing to lose, there is a little comfort knowing that they did lost to the team that lost in the cup finals. Hopefully this year will be better than the last for the Sens.

Scoop is coming back for his 2nd go around at management trying to repeat the performance of making the playoffs last year. Despite all of the turmoil and tension on the team they were able to co-exist and make it into the playoffs. Hopefully this year is a lot easier for Scoop.

Vis is coming back for a 2nd straight year but is hoping to wipe the stench off that still lingers from last year. He is hoping that going from Carolina to Pittsburgh will help with that but in order to completely do it, he needs to be able to make better decisions. Good luck to him, he’s gonna need a lot to get rid of it.

Prod is back behind the bench as an owner after stepping away before season 17 to help out with staff. During his tenure on staff he got a little taste, being an emergency owner during season 20 and it seemed to open the wound and give him the craving to do it again. People need to be worried as he is a good owner and is an instant contender.

What can I say about Rich except he is the perfect example of consistency. Rich has been an owner for the last 12 seasons and he is heading into his 13th season. He has hasnt’t missed the playoffs since season 10 and is building strong teams every year. I expect nothing less during Season 22.

Budz is back for his 5th season in a row as an owner and 9th overall and is usually somewhat competitive even though his teams’ record doesn’t show it. Budz has only made the playoffs as an owner twice and that is something he is looking to build upon this year. I will say though, that he has made them 2 years in a row so he does have a streak going. Will he make it a 3rd?

Shayne is coming back for a second season after making the playoffs last year. He barely made the playoffs as the 2nd wild card, but making the top 8 in the conference is a feat none the less. Shayne decided to change some scenery going from the blistering cold of Chicago down to the sunny beaches of Florida. Hopefully he doesn't get too burnt from then sun that he will be able to lead his team

Playboi is another one of the new owners for Season 22 that has never been in the NHL. Play has spent all 6 seasons that he has been in VG in the PHL and AHL. Last season he led the Marlies to the Conference Finals in the AHL and has been a proven winner whatever level he has been at making playoffs every season but 1. Will that continue this year? Will he be able to tame the NHL as well? Follow along throughout the season to see if he does.

Fluri is coming back for a 5th straight season as owner and is looking to keep his playoff streak alive. He has made the playoffs as an owner or player in 4 straight seasons and is looking to make that 5. Fluri made a short stop north of the border when he played in Montreal for 1 season but he has decided to come back to play in Las Vegas of all places. Let’s see if he can do better in Vegas than the previous owner.

Murph is coming back for his sophomore year as the owner of the Caps and is looking to build off of a successful rookie campaign. Last season he led his team to a 2nd round exit and finished 2nd in the Metropolitan division. Pretty successful for a rookie, I wonder if he will be able to achieve better results this upcoming year.

Last but not least we are now heading to Winnipeg and this is being run by King-Forrest who is back for his 2nd season. Last season was a mixture of both ups and downs and at the end they were on the wrong side of the playoffs. They finished near the bottom of the division and are looking to bounce back this year and hope to achieve success.

Good luck to all of the owners this year and we are looking forward to a great season!

Jonsn
This comment was minimized by the moderator on the site

teamrun420
This comment was minimized by the moderator on the site

Congratulations to all the owners.

Shaynestaa
This comment was minimized by the moderator on the site