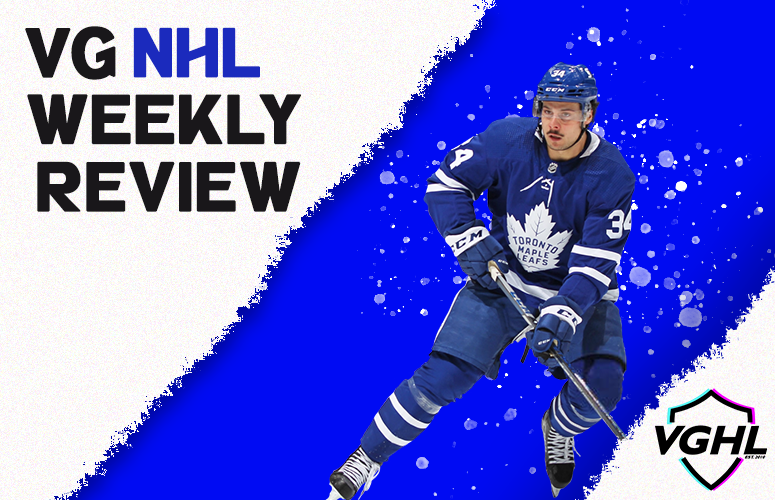 The Montreal Canadiens picked up literally half their regulation losses this season this week. Following five straight wins to start the week the Canadiens lost to both the Canucks and the Blackhawks by one goal before finishing off their week with a 6-3 loss to the Avalanche. Still firmly sat atop the Atlantic division With a three point lead over the Lightning this team Has had a phenomenal season. With 14 points in six games Mawson_99 takes home player of the week.

The Tampa Bay Lightning started their week 7 points back off the Montreal Canadiens for first in the Atlantic division. With their only loss this week coming to the Dallas Stars, the Lightning closed this gap to just 3 points. Their player of the week is xCory95- (yes again) who casually put up 37 points in 7 games.

The Panthers have struggled all season to put together more than three wins in a row. Their 9 million bid on Beantwn has panned out well for them so far With him going 16-10-2 this season. If this team can't figure out how to be more consistent they will quickly find themselves losing their third spot in the Atlantic division to the Ottawa Senators who are now just four points back. BingBongByron69 takes home player of the week with 13 points in just 4 games.

The Devils have dominated this season with an astounding 34-1-1 record.  17-0 at home and 16-1-1 on the road. Recording a goal differential of + 181 this team is the clear Stanley Cup favourite. Player of the week for these guys this week will be split by the D pairing of Liljegren and Dudnastyy who combined for 44 points in 6 games. Unbelievable!

The Flyers have had a great season maintaining a solid pace throughout, and holding steady 8 points ahead of the New York Rangers. With their only losses this week coming to the Dallas Stars and Arizona Coyotes this team looks really good. Player of the week goes to VegaRidge with 27 points in eight games.

Scalz and his New York Rangers I've had a pleasantly surprising solid season. Their veteran leadership is paying off as this team has held strong in the third spot in the stacked Metropolitan Division. If this team continues on their current trajectory they will make the playoffs with ease. Elfpha takes home player of the week with 24 points in 6 games.

The Carolina Hurricanes had a mediocre week at best  going 4-4 and losing to some not very good teams . If this team continues underperforming they will not make the playoffs. Player of the week goes to Smokxy which explains the poor record with 12 points in 6 games.

Kaxo And his team had a pleasantly surprising week considering their opponents losing 1-0 to Colorado and 2-1 to Dallas is honestly incredibly impressive. Actually their whole season has been impressive. As previously mentioned they were eliminated in 7 games last season by the eventual Eastern Conference champs. Player of the week goes to KarlssonIsGod with 24 points in 5 games.

After almost folding a half dozen times this season Toronto finally has a legal roster. That being said they look significantly weaker than a lot of the teams ahead of them. It will be interesting to see what moves Budz makes heading into the trade deadline. Player of the week goes to Tkachuk_07 for being the only player to show up for all 7 games.

The defending Stanley Cup champs appear to be in some trouble as they lost 9-2 to the Devils who are arguably their fiercest rivals. Still 32-4-0 on the season this team should easily make playoffs, however the #1 seed is no longer a lock for them. Player of the week goes to CapitalsFan_08 with 24 points in 8 games.

Apparently every top team just sucked this week as the Stars also had a series of sub par performances. Nonetheless they have the 2nd seed in the West pretty well locked up already, Player of the week this week goes to Reapz with 20 points in 6 games.

The Predators Owner Skillzz, while he may be more well known for his verbal performances than his on-ice ones, has really built a solid team here in the Predators. After weeks of disagreements and some pretty damning screenshots being posted his captain and leading point getter Gesus was finally banned by league staff and that whole in the lineup is very apparent looking at their performance without him. Player of the week goes to Jmm420 with 11 points in 6 games.

The Oilers season can be best described as consistently inconsistent, but due to being in an absolutely garbage division they are at the top of the table. Another mediocre week has them sitting pretty atop the Pacific. Player of the week goes to CCPiper who showed up in a big way with 22 points in his first 6 games as an Oiler.

Coyote see, Coyote do, Arizona sees Edmonton at the top of the table and do their best impression,  matching their 4-3-1 record and  their 41 points on the season.  Player of the week goes to  WallyWallabe with 19 points in 5 games.

Heroic Saunter came back to VG management for the first time in a hot minute and lo and behold he’s challenging for a division title as his team is currently just 2 points back for 1st in the Pacific Division. If this team can just be a little bit more consistent I think they have the best chance at winning the division. Player of the week goes to SE7VXN with 11 points in just 5 games.

The Blackhawks are now 4th in the Central after being leap frogged by the Predators a couple weeks ago but this team has a solid foundation and with their most recent trade seem poised to reclaim that 3rd spot. Messiah isn’t an idiot and could very easily make a splash at the deadline to fight for a better playoff seeding. Player of the week goes to vShot19, the early season acquisition who had 14 points in just 4 games.

One of the now four teams battling for those 3 Pacific Division playoff spots. This team has been very inconsistent with constant roster turnover seemingly the whole season. If Yorsini can’t figure out a foundation quickly they could find themselves in some serious trouble. Player of the week goes to Kovalchuk who collected 20 points in 6 games this past week.

With a 2-8-0 record in their last 10 games the Sharks are trending quickly towards the obsolete end of the scale when it comes to their performance. Kyle isn’t gonna be happy if Peacekeeper doesn’t make some serious changes soon but Peace did make a couple big moves including picking up Brxndamour from the Avalanche. He could make a huge difference for this struggling San Jose team. Player of the week goes to Woezzy who had 5 points in his only game last week.