VGHL3's Week 1 Players Of The Week 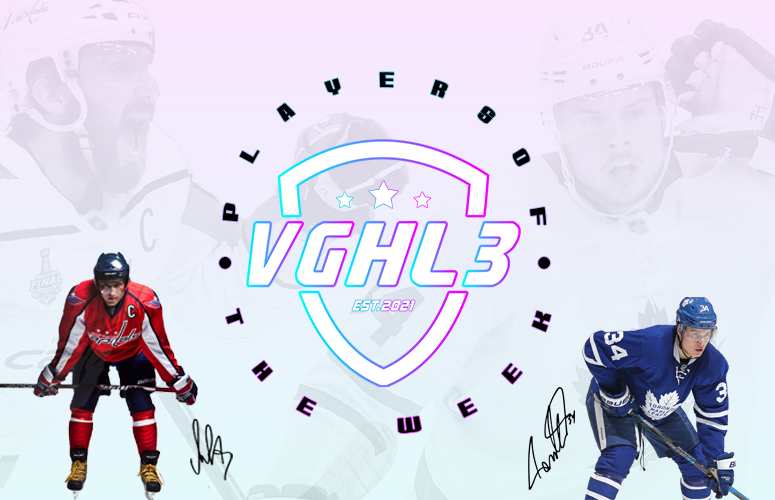 VGHL3s Week 1 Players of The Week

Week 1 has come to a close! A cute little 6 game speed round over the weekend, and we’re off. We’ve seen some teams cruise to 6-0 records, while some.. Uh.. well, didn’t go 6-0. We’ve also seen some players get a head start on the points lead, and some goalies put up insane numbers. Let’s take a look at 4 guys who stood out and will take home Player of the Week honors for week 1!

Nuge went wild this week, helping Minnesota get off to a scorching 5-1-0 record. I got a chance to play against Nuge this week, and got to see first-hand how he can take over a game. In just 3 games, Nuge managed to light the lamp an absurd 14 times while tallying on 8 apples. Nuge creates a lot of offense by playing strong defense, causing turnovers and burning defensemen with speed and slick passing lanes. I fully expect Nuge and his Wild to be atop the standings all season long, with many statistically dominant weeks like this.

Yung is on his bullsh** again. The Florida winger absolutely torched the competition in week 1, amassing 28 goals, 15 assists, and FOURTY THREE points over just 6 games. It’s honestly a shame Florida can’t play this guy 9 a week, a new record would be broken every week. A sneaky, effective forward, whose best asset is his ability to create space for himself and place accurate shots from all over the offensive zone. The state of Florida has 2 very talented rosters, and Yung might be the best of the bunch.

We’re keeping it in the Sunshine State for the defensive player of the week, from the Tampa Bay Lightning; Royalkc. Royal was an assist machine this week, posting 3 goals and 17 assists for 20 points. I’ve played Royal plenty in a plethora of leagues, and his ability to throw out 2 line saucer passes onto the tape always gets me shook. Royal loves to lead the rush, and find his wingers entering the zone with speed. He’ll force you to sit back, and makes it extremely difficult to create speed in transition. Royal and his Bolts will be a regular at the top of the east, and are already emerging as early cup contenders.

Surprise surprise, another Floridian. Marker and his Panthers enjoyed a 6-0 week, with Marker being an absolute animal in the 3 games he played. 3-0 with an .816? In THREES? I’m sure all the goalie comrades can agree, an .816 in threes is ridiculous. Giving up 7 goals in 3 games, when most goalies are lucky to avoid letting in that many in 1 game; bravo. Having the strong Panthers core in front of him helps, but he's still averaging over 12 shots against a game. I can only imagine the stats this guy would post seeing less than 10 a game. Seriously man, well done. I can guess we’ll be seeing and reading a lot about Marker in the coming weeks.

That’s it for the Players of the Week! Want to see me write an adorable paragraph about you? You’re gonna have to pop off like these 4 guys did... Or you can just PM me, I’m actually a pretty nice person. OKAY, BYE <3