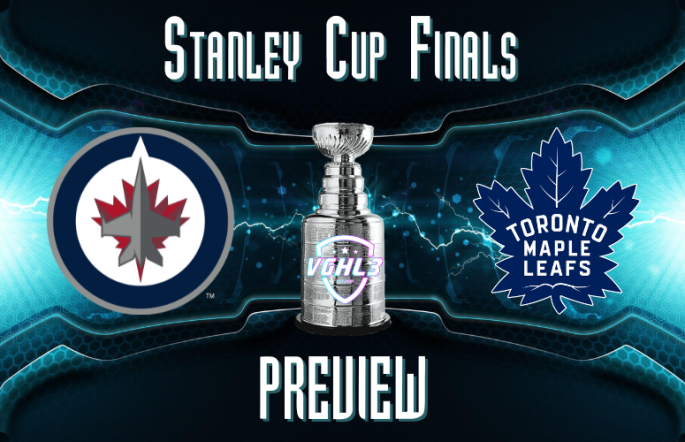 I don’t know if there’s anyone still in this league who didn’t see this crash course for the 2nd time in 2 seasons but here we are. This is what these players have spent the last 11 weeks preparing for. The Leafs and Jets have knocked off their final conference foes and now they must battle for VG3s supremacy. Let’s dive right in for one final ride in season 4.

The asterisk (*) indicates a match-up advantage.

Clark- “1) What would you say are the 3 keys to victory for the Jets?”

Clark- “If you could name 1 strength your team has, what would it be?”

Caps- “I would say 1 strength our team has is being able to play a good team D which leads to our offensive game coming from turnovers and smart breakouts and so on and making other teams pay.”

Caps- “I wouldn’t be concerned at all, most of us including me have experience in the finals in VG and other leagues so we know what it takes to win in the big ones.”

Clark- “What is your predicted result of the series?”

Clark- “Thank you for your time.”

Clark- “What would you say are the 3 keys to victory for the Leafs?”

Sevy- “1. Availability on point for sure. 2. Play better overall defensively covering the middle. 3. More passing plays in the offensive zone, when we play against high skill guys like this, one man shows aren’t going to work.”

Clark- “If you could name 1 strength your team has, what would it be?”

Sevy- “Chemistry when we can actually get the lines we want going for sure.”

Sevy- “I mean I  hate to say it again but avail man. We haven't been able to get our game 7 lineup out once in the playoffs and that can hurt a lot when we play against a stacked line.”

Clark- “What is your predicted result of the series?”

Clark- “Thank you for your time.”

4-7 games. Best on Best. This is for all of the freaking cabbage. Regardless of what team wins this series there will be players walking away with a 2nd VG3s ring. There will be anger, there will be elation, there will be brotherhood, there will be defeat, and there will be glory. The Jets were the best team during the entire regular season, no doubt about it. However, Toronto was never far behind with the 2 squads ending up separated by only 20 points. The Jets also have a slight edge in goals against per game allowing just 2.13 goals compared to Toronto’s 2.67. The Jets also boast almost a full 2 goals per game more throughout the regular season. Honestly on paper this looks like it’s a blowout waiting to happen. But we can all thank the Hockey gods that this game isn’t played on paper. The time on attack per game is almost dead even between the 2 teams and possession will be everything during this final showdown. Winnipeg had a relatively easy route to the finals compared to the Leafs who had to endure grueling battles with the Lightning, Hurricanes and most recently the Panthers. They have barely run their top line and yet still they are one of the only 2 remaining teams. Chapy and Champo have become bitter rivals since VG3s Inaugural season. This is their 3rd head to head finals battle since Season 1 with both Owners claiming a ring over the 3 year span of this league. Champo is at this point a grizzled NHL veteran with a history of success. Chapy has quietly made his way into the conversation with some elite level names through IQ and player database knowledge. Not to forget that somehow, some way this series could end with Fordifide, Chapy’s self-proclaimed “lucky charm” taking home his 2nd chip. There are so many storylines I couldn’t list them all if I typed all night long. My Prediction: I couldn’t give a fair or unbiased opinion for this series. Head to Head they are just so ridiculously even and regular season stats mean a whole lot of nothing at this point. I’m going to get ripped a new one by Adam and Eric for this but I’m taking the Leafs in 7 games. It just feels like it’s their time to be in the spotlight. The Leafs win their first VG3s Cup in 7 games 4-3.

So here we are. I’ve written all there is to write, I’ve sang my song of expectations for the final time this season. It has been an unbelievable pleasure to serve as both the VG3s Western Conference Media Correspondent and the Official Playoff Preview Provider for all of my dedicated readers. If it wasn’t for all of you I’d have no reason to write these articles on a weekly basis. You guys make this league what it is. Each and every one of you regardless of skill level. Maybe next season will be YOUR season. I guess we’ll have to wait until the New Year to find that out, though. I thank you all for traveling alongside me through the ups and downs of this 4th season of VG3s and I hope to talk to you all again very soon. It has truly been a pleasure to serve you for these last 12 weeks.

TTFN, but not for forever, with love, gratitude, and dedication,