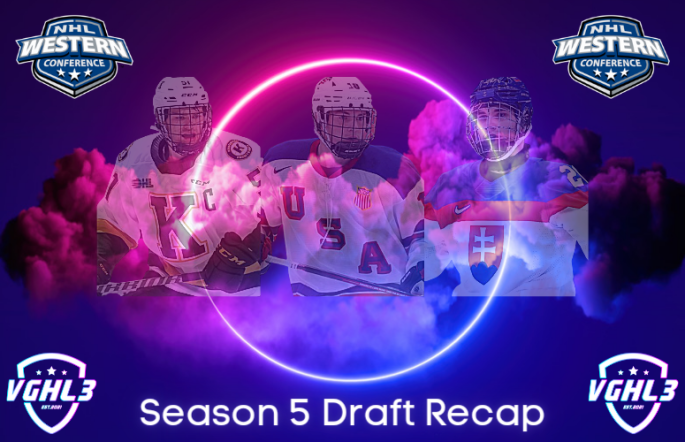 I simply do not know these guys or most of who they drafted so they get an average grade until I see anything that shows one way or the other.

I know one player on this team’s entire roster and he’s good but not great. Shout out to NowYoDead for being a great dude and great teammate and the only guy I recognize here. I said I won’t speak on guys I don’t know and you’ll certainly notice a pattern with this team.

This is a new one for me. I literally just don’t know anyone on this team. It’s quite odd.

Still the exact same thing as the last few. When I made my criteria I was expecting like 1 guy per team to fit that description but Anaheim apparently saw that as a challenge. Their goalies are complete unknowns.

In an unbelievable turn of events I don’t know this entire team. I know this player base better than anyone in the league and I only recognize 2 names on this entire roster. Sorry guys. Next season will be better. I promise.

On the ice this management duo is nearing dumpster fire territory but at the same time holy cow they know how to build a team off it. Last season they built the team after a hostile takeover and they are well set to build off that Western Conference finals run.

Having Castro as your top line C is never a bad thing. Especially when you’ve been close with him for a long period of time. He’ll get a fair number of points although he won’t be doing anything too fancy.

I haven’t seen old Dusty play Defense in a long time but based on how Dustin and Bubba finished they still have some defensive ability in that very old tank of theirs. Nonetheless they’ll want to trade for a full time top defenseman at some point in the near future.

Seagull is in my honest opinion the best goalie in  VG. He’s able to get wins where other goaltenders could only dream of. He’s truly a game changer and I look forward to seeing him perform over the course of a full season. This is my early Vezina favourite.

I considered giving this team an A- but there are some big questions in terms of their depth. Their top line should be just fine and I have them as a lock for the playoffs.

Yes, that's not one, but 2 pluses. These guys are RIDICULOUS. I don’t know that there’s another management duo in any league who is more talented than these 2 cats. This team is going to kick butt and take names all season long.

This offense is just broken. In every  sense of the word. The 2 highest point getters in VG3s all-time on a line together. I expect to see some records absolutely smashed. This should be a treat all season long. Oh and by the way they have Llaytxn too.

Champo is a defenseman. Most people seem to forget that. This team is stupid deep and when Champo is up front they still have Vulpix to shore up the back end. This is insane that other teams would allow it to happen.

Hey their goaltending isn’t great but at the same time I doubt it will need to be. Ninja and Elite will get the job done just fine.

Not going to even try to hide it. These guys are winning the West. It’s not up for debate. They’re just that freaking good. Perfect season is a real possibility with this bunch.

I feel bad about this one I really do but there’s only like 4 guys on this team that haven't hit my line and that says a lot. A great guy running this team but it appears the guys who he drafted aren’t willing to even give him a shot and unfortunately that’s a failure as a manager.

If the guys who tell me they’re not playing seriously aren’t playing, this team is in deep deep trouble. I expect a number of trades to be imminent. Hyper is mad. Knight is mad. Beamed is very average. Bedard is mad. Juggernaut isn’t good. Again. Deep deep trouble,

This team lacks the personnel on defense even if they were willing to play and they’re very much not so I’d expect this team to be quite bad. Like extremely bad. This would be an F but Hyper might show up? It’s still bad.

Worf is alright I guess. Knight is apparently not playing goalie so we’ll get to see first hand how good of a goaltender Hyper is. Could be very interesting. But Worf is good enough to give this team a B.

Like I said before, if your entire team refuses to play that’s an abject failure. I get it’s not totally on Twbai but he had to have known that drafting toxic players was a risky move. Hopefully other managers are willing to give him fair trades to facilitate the removal of these toxic players. If not, well this team isn’t even a remote threat for the playoffs.

I don’t know what to say here other than if you’re an owner you should show up for the draft…. Somehow Snipersteve failed to do that… Not joking. Aye carumba. This is going to be a good laugh for my loyal readers.

Probably in large part due to not showing up for round 1 and drafting ActionDave in round 2 this team is in a situation best summed up simply as “Yikes.” This team better hope and pray for an auto assign miracle but knowing this Owner they’ll get traded away before they play a game.

See- “Defensive Grade”, retweet but change “defense” to goaltending. Hope Alpha can stand on his head because it’s him against the world.

I promised I’d give Terra a shoutout after making truthful statements about how bad this team is but I wasn’t expecting it to be quite this bad. I love Terra and I love Action Dave but by golly there is no chance this team will ever even sniff the rear end of any other team in the league. I firmly believe this will end Steve’s tenure as a GM in one of the most embarrassing failures I have ever seen. If they win 3 games this year I might have a heart attack. They’re genuinely THAT bad.

I don’t know a ton about either of these guys but they seem like alright dudes with a decent head on their shoulders, that being said they are very very clearly not the most skilled guys individually which puts them at a slight disadvantage.

Nothing too crazy here. These guys may score, They may not. I expect the locker room atmosphere will be pretty consistently laid back. Maybe their stats aren’t telling the whole story when it comes to what they’re capable of. This team is a bit of a wild card.

Slapshot is the only real bright spot when it comes to skaters on this team. I wish I was joking but these guys around him are either unknown or established as not very good. I fully expect to see Slap getting a ton of minutes if this team wants to battle in what is luckily a very weak conference.

The only skill that this team has covered at all is in the net. Artuo and Knoxey both are elite level goaltenders who will need to play absolutely unreal if this team expects to have any sort of an impact in the standings.

With this team’s goaltending as good as it is and the Western Conference as weak as it is, I fully expect to see this team in the playoffs. Getting smashed in the first round by the Hawks no doubt but definitely still in the playoffs.

This team’s management isn’t necessarily bad but they have done absolutely zero to convince me they’re good. Hopefully they can both have a really strong season and make me turn my head. I really like the vibes these guys bring, let’s hope they can turn it into on-ice success.

This team did draft Yung who on a really good day can certainly carry an offense however as everyone who has managed him will tell you it is absolutely IMPERATIVE to ensure he is happy or else he will quit. Players like this are very risk vs reward based and if this management team can keep Yung happy they should be just fine.

There’s more unknown players than known players on this roster however there is clearly a significant push by this team for depth and that should bode well for them. If even one of these many defensive prospects can become a factor at both ends of the ice they should be just fine.

Look I love Vlady as much as anyone but at the end of the day he can’t be your only option in net, and I’m sure even he would agree. He is more suited for a sheltered backup role. He’s by no means a bad goaltender but he shouldn’t be your starter.

This team in a stronger conference would have some serious question marks surrounding it but in this conference they should comfortably slide into a playoff spot without too much trouble. I hope to see these guys, just like the Wild, really use this season as an opportunity to build on what so far have been very mediocre careers.

Both these guys have zero history or statistical reference in VG so I’m going to go ahead and start them at a C which quickly moves down to a D+ due to them throwing a high first round pick.

Look I have no idea who Clxpped is and I’m sure he’s a fantastic guy but there’s a very good chance that if I’ve never even heard of you, you shouldn’t be drafted in the first round. Let’s hope it pans out for this team but they left a lot of very very good options on the board with a pick that to me reads as a buddy pick.

That whole point I just made is made even more ill advised when you consider the fact this team really neglected to draft a true top defenseman. I don’t expect them to struggle too much due to the number of options but don’t be surprised to see them trading for a Defenseman.

Monkey is a very good goaltender but he’s also their only goaltender. I don’t know whether or not he’s prepared to play all 60 games this season but if he’s not then management should move one of their nothing forwards for a backup goaltender. Monkey can certainly shoulder a fair bit of the load but he cannot be your only option.

This team has some serious ups and downs and I highly doubt they will come within a country mile of being a cup threat but they’re probably not going to miss playoffs. They’re yet another team that falls into the category of “exceptionally mediocre” and there shouldn’t be much expected of them. Hopefully these rookie managers are good with the trade market, if not this could be a long season.

So there you have it, a brief review of every team in the eyes of everyone’s favourite person to yell at in VG. I hope you all enjoyed the read as it took a ridiculous amount of time and pain from a broken hand to get this out to all of you. As always feel free to debate in the comments or even tag me in the discord as I love hearing and seeing your thoughts on my work but please keep it respectful. You have no idea how glad I am to be done with this God-forsaken behemoth of an article. If you haven’t read the Eastern Conference Review be sure to check it out!