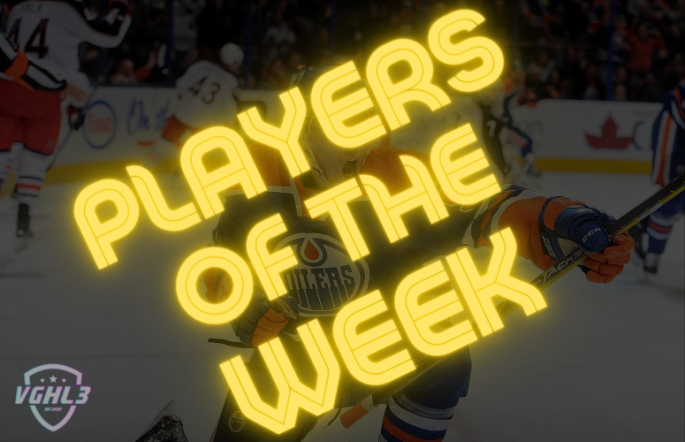 Player of the Week: Round 1

Welcome to the seventh edition of VGHL’s 3s Season 5 Players of the Week. The playoffs are here and round 1 has concluded. There were a lot of series that went the way of expectations, but there were a few upsets as well, at least, according to seeding. Despite the upsets, there were familiar players from the regular season who proved that they were not just regular season performers, and can get it done in the playoffs as well. Versatility was shown by some players in the playoffs as well, winning awards in different positions that they mostly played in the regular season, so without further ado, let’s see who that was and who the rest of the winners are.

Multiple time defender of the week and probable defender of the year this season, Champo proves he can get it done up the ice as well, taking over the forward spot for his team and taking his team to the second round. The Chicago Blackhawks owner has been the best defender in the league this season, and now he proved he can get it done from forward as well. The Blackhawks were already dominant when you knew what they were going to throw at you, and now that the Blackhawks have flexed their versatility and depth, they may be impossible to stop. Especially if Champo can put up performances like this, putting up 14 goals and 27 assists in just the 3 games he played but winning all 3, the Blackhawks have proven they have not stopped their regular season momentum.

The Washington Capitals are off to the second round after a 4-0 sweep of the Florida Panthers, and they were led by their star all season, Juicy. With 3 goals and 14 assists from the blue line, going a perfect 3-0 for the Capitals in the sweep, Juicy continues to lead the Capitals with his play in the postseason. Juicy was a force to be reckoned with in the regular season, and when the times are supposed to get tougher, Juicy just laughs that off and proves he’s just been warming up all season. The Capitals will lean on Juicy to keep his momentum to continue their road to the finals.

In a hard fought 6 game series with the Dallas Stars, the Detroit Red Wings leaned on the performance of C-land to help lead them to the second round. The Red Wing owner stepped up for his team when they needed him the most, and he led by example for the entire team, keeping them in every game and giving them a chance even in the losses. Facing about 11 shots per game, C-land had an .831 SV% and 1.92 GAA for the Red Wings, and will need to keep up his performance to help his Red Wings continue on their playoff path.

And those are your players of the week for season 5 round 1 for VGHL3s and their honorable mentions. Congratulations to the winners, on not only winning your player of the week awards, but also moving on to the next round in the playoffs. Every single winner this week is onto the final 8, and while performances of the week is a great award to have, at this point of the season with the Cup being so close, we all know what the true prize is. So with that being said, good luck in the Conference Semis, and see ya next week!